Georgian PM names all but one of new ministers

Georgian PM names all but one of new ministers 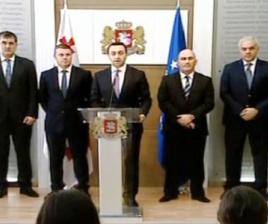 Candidate for new agriculture minister is Otar Danelia, a former deputy in the same ministry. Giorgi Mghebrishvili, former governor of the Kvemo Kartli region, is candidate for new prison minister.

It is still unknown who will be culture minister. Gharibashvili promised to name the candidate on Wednesday morning.

“I know there is great interest in the culture minister. This is one of the most important ministries. We are carefully selecting the minister,” he said.

Several persons are under consideration for the post, he said, and if the candidate is not named by Tuesday evening, he or she will be announced the following morning.

On Monday, the PM named former Prison Minister Sozar Subari as a candidate for new refugee minister and Elguja Khokrishvili, former Infrastructure Minister, as a candidate to take over as new environment minister.

The candidate for culture minister attracts the most interest. Gharibashvili and former Prime Minister Bidzina Ivanishvili didn’t like Guram Odisharia, because he wasn’t able to settle the Sakdrisi gold mine issue. According to foreign experts, more than 5,000 years old traces of humans have been found in the mine, but last year the Culture Ministry lifted site’s protected heritage status and allowed the company RMG Gold to conduct mining there.

The potential for damage to the site, which scientists warned about, sparked a long-term protest campaign demanding to give the place back its status as a cultural heritage site and not let the company do any more digging there.

Although it hasn’t been proven, many people think the prime minister has interest in this mining company and doesn’t want to stop it from digging in Sakdrisi.

During one government session, the prime minister gave Odisharia a reprimand because of the controversy surrounding Sakdrisi. Since then, some have expected that Gharibashvili would sack the culture minister.

The other candidates named by the PM are mostly representing the same body and have been working in different positions there. Many people think that the reshuffle of ministers will not bring any results. Moreover, no reasons were given for why the ministers were replaced.

The PM said they had done good work and only said that it was necessary to replace them to ‘justify the confidence of the people.’

The candidates for new ministerial posts say that their greatest motivation is to ‘justify the confidence of the prime minister.’

According to the constitution, if one third of the government members are replaced, parliament has to declare trust in the new government. There are 19 ministers in the Georgian government and seven were dismissed, which means that it will be necessary with a new vote of confidence.

The parliamentary opposition, the National Movement, considers these changes ‘superficial’ and says they don’t plan to support the government.

MPs for the governing Georgian Dream coalition say that the changes were necessary and they are willing to support the new personnel.