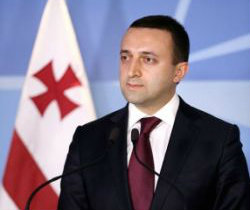 One of the topics discussed was the possible signing of a military agreement between Russia and Abkhazia, which the Georgian government believes is a creeping annexation.

Garibashvili claimed that despite Georgia’s ‘constructive attitude’, Russia continues its ‘destructive policy’ against Georgia in the region, a policy aimed at de facto annexation of Abkhazia and possibly also South Ossetia.

After the meeting, he told journalists at a joint press conference that what is happening in Ukraine right now is a continuation of the Russia-Georgia war in August, 2008.

He said Georgia will continue to work with its partners and recalled that Georgia went through the conflict in 2008 and Ukraine’s events is a continuation of that war. Georgia has experience and will continue moving forward in ‘the right direction.’

The secretary general said NATO is doing what it should be doing and is ready to reinforce air control.

The National Movement claims Georgia’s new government has deviated from a pro-western course which Georgia has had for the last decade.

The party’s spokespersons have been accusing the PM and other government members of having stopped talking about the war with Russia and installation of barbed wire and fences along the border by Russian soldiers. As a result of this alleged silence, everybody has forgotten about Georgia these days and are only talking about Russia’s pressure on Ukraine.

The National Movement held a rally in Tbilisi on Saturday with the slogan ‘no to annexation’, accusing the government of being silent on the issue. Representatives of the governing coalition said it considers the rally a party event and that they too are against annexation.

In a comment after the meeting on Monday, NATO envoy James Appathurai said the new treaty with Abkhazia ‘is part of a pattern of Russia imposing itself on other countries in Europe.’

He said Janelidze, the new defense minister in Georgia NATO understands both the strategy and the detail of his portfolio. Janelidze has background from a newly established security body filing under the prime minister.

“I was also pleased to hear that there is a good handover with his predecessor, Irakli Alasania. Overall, from my point of view, an encouraging start.”

In an interview with Georgia’s Public Broadcaster, Appathurai also claimed that ‘concerns about selective justice’ in Georgia have not yet been dispelled and that the most recent events didn’t help to dispel concerns either.