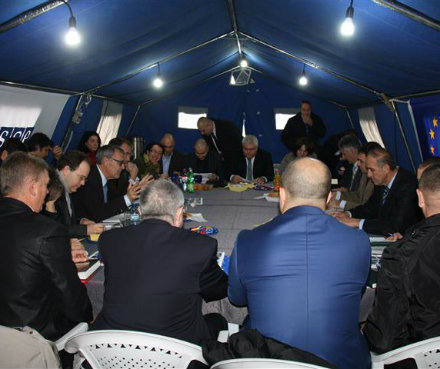 Practical problems for people affected by the conflict is the main focus of the IPRM meetings. (EUMM.)

TBILISI, DFWatch–Monday another meeting was held of the Incident Prevention and Response Mechanism (IPRM) between the conflicting parties of the 2008 war.

This was the 50th such meeting, and as usual it took place at Ergneti, a village close to the de facto border.

Toivo Klaar, head of the EU Monitoring Mission, which facilitates IPRM, said the regular meetings ‘have considerably contributed to the stabilization of the security situation on the ground.’

IPRM meetings, which deals mostly with practical problems of people who are affected, is one of three channels for talks between the parties of the frozen conflict. It is supplemented by the Geneva talks, with high-level, often confrontational statements, and low-key informal talks between the one Russian and one Georgian diplomat, who speak of non-diplomatic issues, like economy, culture and transport.

There have been no diplomatic relation between Georgia and Russia since the war in August, 2008. Consular issues, such as visa applications, are formally handled through Swiss embassies.