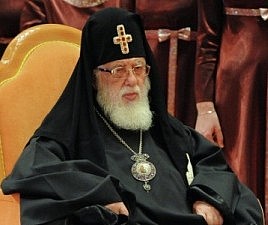 TBILISI, DFWatch–The Patriarch’s Christmas epistle continues to cause controversy in Georgia. Not only in vitro fertilization and the use of surrogate mothers, but also what he wrote about sexual minorities.

“It’s a pity that minority groups, that have sharply negative ideas about Christianity, are named as representatives of humanism, and those who are against their aims, especially the church, are discredited,” Patriarch Ilia II wrote in the epistle.

He also said the Georgian church is glad that legalizing gay marriage is not a requirement for EU membership.

Philip Dimitrov, the EU ambassador to Georgia, said earlier he had been told by Georgians several times that Europe wants to impose gay marriage in Georgia, but this is not right.

“For association with EU it’s enough to be tolerant and not preach hatred on sexual, ethnic, religious background,” Dimitrov said.

According to the Christmas epistle, the Church thinks LGBT people need help and support to overcome their sinful tendencies and return to the right way in life.

On May 17, 2012, clerics led thousands of people who interrupted a small, peaceful demonstration to mark the International Day Against Homophobia and beat a group of LGBT supporters.

But non-governmental organizations (NGOs) in Tbilisi have criticized the Patriarch’s attitude toward sexual minorities.

Nino Bolkvadze, a lawyer who works for the NGO Identoba, said that in a country where 95 percent of people trust the Patriarch, and there is an existing problem with hate crimes against LGBT people, this kind of statement is very dangerous.

The epistle caused a reaction among NGOs in Tbilisi, but polls reveal widespread intolerance toward sexual minorities among the Georgian population.

According to a poll published by National Democratic Institute (NDI), 37 % consider think it is absolutely insignificant to protect the rights of sexual minorities, while 21 % consider it significant.