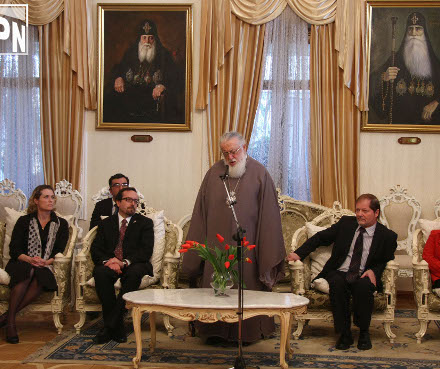 TBILISI, DFWatch – Georgia’s Patriarch, Ilia II, told foreign diplomats that their assistance is needed for the difficult election period his country is heading into.

Ilia, who has great influence among the population, appealed to the diplomats during a ceremony Friday at the Georgian church’s administrative building, called the Patriarchy, to mark the 95th anniversary of the restoration of the Georgian Church’s autocephaly.

“I’ll be happy if you come often. We have a difficult period, there are parliament elections and I request your help,” the Patriarch said, surrounded by ambassadors of many countries, like the U.S., the Czech Republic, Germany, Netherlands, Israel, Latvia, Japan, Greece, and the EU.

At the end of the meeting, the Patriarch presented his self composed song Angus Dei and thanked them for the visit.

The diplomats left the Patriarchy without making any comments.

A few days ago, an opposition politician who is part of the opposition alliance led by billionaire Bidzina Ivanishvili made a similar appeal to foreign diplomats in Tbilisi.

Free Democrats leader Irakli Alasania from Georgian Dream, at present considered the strongest contender to the ruling party ahead of October’s election, said he had verified information that the government is setting up illegal paramilitary groups to be used against the opposition and asked for help from diplomats to monitor the government to avoid civil war.

Khatuna Lagazidze, who was head of the analysis department at the Georgian Security Council for several years, says that the Patriarch’s gesture Friday is of great importance, because it shows how acute the country’s problems are.

“The political sphere is not self-regulating and the country is sliding into a very bad scenario with the release of social tension. Because of this, the patriarch had to make what is clearly a political statement, which he hasn’t done before,” she told DF Watch.

“Now the reason to his decision is that he cannot see a way out from what’s happening in the country during the election campaign and he has to appeal to the diplomatic corps for help, so that parliament doesn’t become the beginning of the next civil confrontation, but the grounds for changing the government through elections,” Lagazidze says.