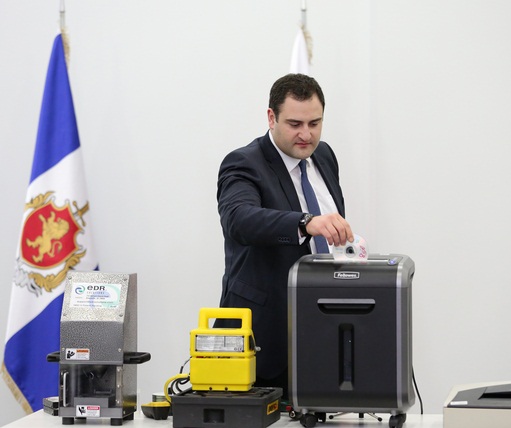 TBILISI, DFWatch–The question of who should hold the access keys to the ‘black boxes’ containing secret surveillance material in Georgia has been postponed six more months.

As other former Soviet countries, Georgia has experienced widespread use of phone tapping and other forms of secret surveillance by the government.

In February, a large part of an archive containing secret and compromising recordings was destroyed. But still today, the technical equipment is in the hands of the government, not private telecom companies, and a coalition of non-governmental organizations (NGOs) want to change that.

But again, no consensus was achieved about who will hold the access keys, which are required to listen in on people’s phone conversations in Georgia, even after more than a half year of discussions and work by special groups.

A special group, which was set up to work on determining who should have the access to personal data gained by secret surveillance, should finish its work by November 1, 2014, but the deadline is now about to be postponed to April 1, 2015, as the work done by the group so far ‘wasn’t necessary to form a legislative initiative on this issue’, according to an explanatory note to the law on electronic communications.

Until then, the access keys to the data remain in the hands of the operative technical department of the Interior Ministry.

The political groups that make up the government coalition were critical of how the Saakashvili regime was using secret surveillance against its political opponents, journalists and others. But after coming into power, there is a suspicion that the government continues using secret surveillance, especially when the Interior Ministry still has the access to the material. The campaign This Affects You Too, a collection of human rights NGOs which was instrumental in the Georgian Dream election victory in 2012, was revived this year to try to do something about the black boxes issue.

Yesterday, tepresentatives of these NGOs told the speaker of parliament that they are opposed to postponing the discussion about this for another six months.

Lasha Tughushi, Eka Gigauri, Kakha Kozhoridze, Zviad Koridze and Lika Kajaia, who were also members of the working group, claim that parliament decided about postponing the discussion without agreeing with the working group, which was set up by the Judiciary Committee specifically to discuss this issue.

In an appeal to the speaker of parliament they write that postponing the discussion will let the system of law enforcement bodies violating the private lives of people continue.

“The [surveillance] system was always used as a weapon by law enforcement bodies against political opponents and people with different views,” they write, adding that unfortunately the new government found it difficult to make a brave political step and the government wasn’t able to let go of a weapon which grossly violated human rights.

Shalva Shavgulidze, MP from Georgian Dream coalition, on Tuesday explained that the discussion on this issue will be postponed because the term, which was ending on November 1, wasn’t enough to reach a decision.

He said the working group didn’t show off any proposal written on the paper to which Tughushi responded that the major problem was that for more than a month and half, the working group failed to gather, which is also described in their appeal to the speaker of parliament, where they write that the Judiciary Committee never once asked the working group to meet.

Even though the working group didn’t gather, representatives of civil society came up with a proposed solution to the issue, but there never took place a session at which to present this idea.

The Public Defender, who is also member of the group, said on Tuesday that the parliament has had enough time to prepare an amendment and has enough resource for this, but by postponing the discussion the Interior Ministry continues having unlimited access to information about people’s private lives.

Speaker of Parliament Davit Usupashvili, who was visiting Belgium, responded that it has been interest in the case to postpone the discussion about the draft bill in order to ‘achieve a final result and not to stop at half way.’

At the session of the Judiciary Committee, MP Zurab Abashidze said that Georgian Dream Free Democrats faction won’t vote for postponing the deadline by six months, because they think the November 1 deadline was sufficient to prepare the draft.