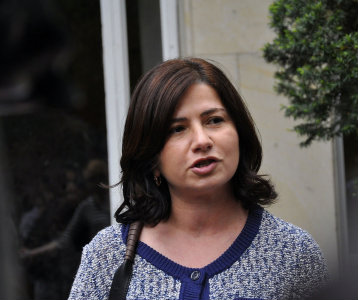 TBILISI, DFWatch–The Georgian prime minister claims the party associated with former President Mikheil Saakashvili is planning to destabilize the country in connection with a demonstration planned on November 15.

The National Movement announced the rally a few days ago. It will take place on Rustaveli Avenue in the center of Tbilisi and will be an expression of resistance against the ‘inaction of the government’ in the attempts by Russia to annex parts of Georgia.

Prime Minister Irakli Garibashvili said on Wednesday that he has been informed that the National Movement rally on November 15 is in fact a provocation. He told journalists that members of the party are willing to pay 15 laris to people from different regions of Georgia to come to Tbilisi and ‘beat each other.’

“The November 15 rally is of course ridiculous. I don’t want to comment on a rally announced by traitors,” he said, adding that he doesn’t want to spare his time on Saakashvili’s part.

“If ‘natsionalebi’ [National Movement members, ed.] don’t care about the Abkhaz and our citizens, it is not something new now.”

Irma Nadirashvili from the National Movement responded by saying that Garibashvili and his government are in a state of panic over the upcoming rally. She said, even if people are offered 15 lari to take part in the rally this is a provocation by Garibashvili and the State Security Service.

She said, many people will come to Rustaveli Avenue and no-one should be surprised if many will protest government’s policy towards Russia.

She said the government won’t be able to interrupt the rally.

November seems to be a symbolical month for protest rallies, especially for the National Movement, as it was on November 23 when President Shevardnadze was deposed in the peaceful coup d’etat known as the rose revolution.

But it was also on November 7, 2007, that Saakashvili’s government used force against anti-government demonstrators and sent police into the studios of Imedi TV while it was on air and closed it down. A state of emergency was also announced, and the handling of the crisis was strongly criticized by Western politicians.