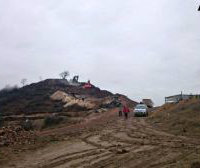 TBILISI, DFWatch–The Georgian parliament on Wednesday decided to halt work at a prehistoric mine that was almost destroyed by a mining company, and to put together a commission to investigate the legality of the ongoing work.

The cave complex in Sakdrisi has more than a 5,400 years old traces of humans according to archeologists, but was recently almost entirely destroyed by the mining company RMG Gold.

The commission is the initiative of the Free Democrats, a party which recently left the government coalition, and the initiative will mean once again halting the mining work.

RMG Gold, which digs for gold and copper in the Bolnisi region, recently resumed open-cast mining in Sakdrisi using explosives after the Culture Ministry gave permission.

The resumption of mining work led to massive protests by environmental activists, NGOs and young people in general.

But locals in the Bolnisi area demonstrated in support of RMG Gold, because their livelihood depends on the resumption of work. Hundreds of people came to Tbilisi and demonstrated outside the president’s palace and the government building.

58 MPs voted for setting up the commission on Wednesday. 14 voted against. Among the MPs who voted for were the Republicans faction and the National Forum faction, both of whom are part of the ruling coalition, as well as a few MPs from Georgian Dream itself.

The Georgian Dream faction was opposed to having the commission.