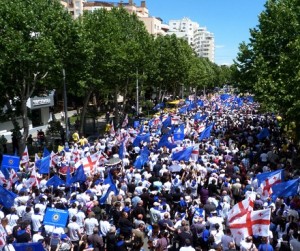 The opposition Georgian Dream started its election campaign May 27 in Tbilisi (above). Today, they continue in Kutaisi. (Photo: Mari Nikuradze.)

TBILISI, DFWatch – The main opposition movement in Georgia plans to hold another large rally on Sunday, this time in the country’s second largest city Kutaisi.

Georgian Dream, which is a coalition set up by Saakashvili’s main competitor, billionaire Bidzina Ivanishvili, held their first demonstration on May 27 in the central district of Tbilisi. There is still a discussion about how many people participated. Estimates range from 30 000 to 250 000.

Maia Panjikidze, spokesperson for Georgian Dream, says that Sunday’s rally will be ‘as impressive, as large-scale demonstration as it was the first time, but of course in different proportions, as Kutaisi is a smaller city.’

City Hall in Kutaisi waited some time with answering, but finally gave organizers a permit. It was originally planned for June 7, but local authorities denied them a permit for that day due to a concert.

Another problem was location. Georgian Dream has been denied permission to hold the rally on the central square, and instead have been allowed to use King David the Builder’s Square.

“Even though we understand that City Hall faced serious difficulty, they still have to prove to Kutaisi’s population why it was correct to refuse us to hold a rally on Central Square,” Maia Panjikidze said.

Kutaisi is where Georgia is building a new parliament building after a decision by President Saakashvili. Construction work is partly finished and the first symbolic session was conducted on May 26, Georgia’s Independence Day. But moving parliament to western Georgia continues being criticized among society and particularly the opposition.

It is still unknown what will happen to the current parliament building on Rustaveli Avenue in the capital Tbilisi. Georgian Dream promises to address this issue if it comes into power. They criticize the government for having made a hasty desicion without asking people first.

One possibility mentioned by Georgian Dream is to transform the new parliament building into a concert hall or conference hall.

The government says moving parliament is done in order to decentralize the country, as every important body is located in the capital, including parliament, Supreme Court, the president’s residence, and all ministries. Transferring parliament to Kutaisi will contribute to regional development.

Construction of a new parliament started in 2009 by demolishing a World War II memorial. The explosion killed a mother and her child.

Friday, a construction worker died when one of the wings of the building collapsed. No-one else weas injured, according to the health ministry. Georgian Dream expressed its condolence to family of the victim.