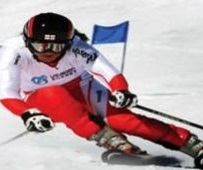 Nino Tsiklauri is one of four Georgians taking part in the Games, and was flag bearer for the Georgian team. Tuesday, she competed in giant slalom, finishing with the time 1:27.27, and 54th place after the first run. Finally, she advanced 5 positions.

On February 21, Tsiklauri will go on to participate in the slalom competition.

The other Georgian athletes in Sochi are alpine skiers Iason Abramishvili and Alexi Beniaidze, who will compete on 19-22 February, and figure skater Elene Gedevanishvili who will be in the competition on 19-20 February.

Part of the Georgian public are against their athletes participating at Sochi, because of the situation with Russia propping up two breakaway regions with money and military bases. Sochi lies only 35 km from Abkhazia.