Georgian minister: sanctions not proper way out of Ukraine crisis

Georgian minister: sanctions not proper way out of Ukraine crisis 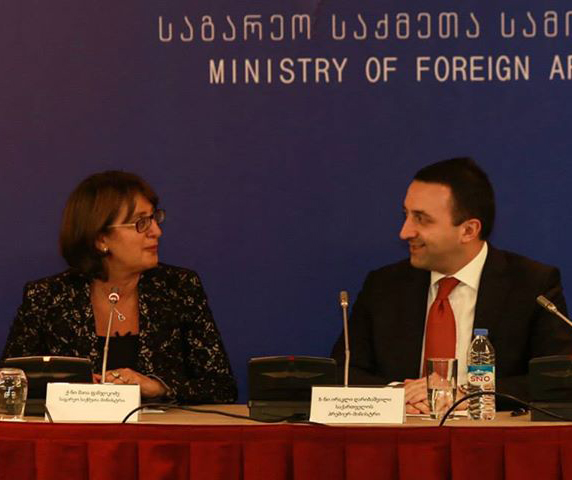 Tbilisi, DFWatch – Georgia’s Foreign Minister says that western sanctions against Russia and reciprocal moves by the Kremlin are not proper way out of the Ukrainian crisis and that conflict should be solved rather by the negotiations.
Maia Panjikidze, the minister, made this statement on Thursday evening during closing press conference of four-day long ambassadorial held in Tbilisi, expressing concern over escalation over Ukraine, in response of the journalist’s question whether western sanctions would facilitate Ukraine’s and Georgia’s NATO perspective during the upcoming Alliance summit in Wales, in September 4-5.

Minister said that the western sanctions were followed by reciprocal moves of Russia, banning food imports from the US and the EU; she also referred to Russia’s decision to close airspace for planes flying form Ukraine to Georgia, Armenia, Turkey and Azerbaijan. Minister said ‘these concerns are the subject of a great deal.’
‘Sanctions, severing contacts, etc., of course, are not way out of (Ukraine) crisis and all (parties) involved should sit down at the table and seek ways of peaceful resolution of the conflict,’ minister Panjikidze said.
She continued that now it is necessary to look at how events would develop, how it would influence on the EU and Russia’s economies.

“It’s obvious no one wanted such developments to go and this was caused by the crisis in Ukraine. West tries to solve this problem through peaceful way, but it seems they decided that radical measures were necessary,” the minister said.

Regarding the NATO summit, the minister said that Georgia is quite careful in assessing its prospects, expecting progress in two ‘directions’. First, Georgian side expects ‘set of the specific arrangements’ and, second, ‘adequate recording of Georgia’s progress in the NATO communique.’

Maia Panjikidze didn’t mention NATO Membership Action Plan, a long standing desire of Tbilisi. Many Georgians hope that Ukraine crisis might urge NATO member states to seriously reconsider they attitude toward Georgia’s membership perspective, especially those western European states who have been reluctant to madden Kremlin with this move. Although, statement made by the German Chancellor Angela Merkel in June amounted to a cold shower for those hopes.