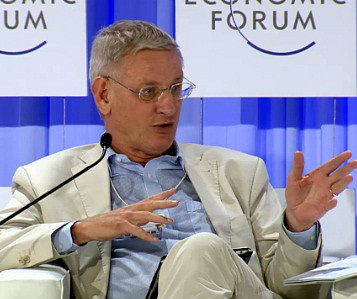 TBILISI, DFWatch–Georgia’s foreign minister says Swedish Foreign Minister Carl Bildt is putting to perssure on the courts in Georgia by a statement criticizing the investigation of former officials.

Foreign Minsiter Maia Panjikidze said this on Wednesday in response to the following tweet by Bildt:

“Georgia authorities deviate from European path in using justice system for revenge. Does damage to the country.”

The Appeals Court in Georgia turned down a motion by lawyers for ex-president Mikheil Saakashvili against a decision by Tbilisi City Court to place him in pre-trial detention in absentia.

He is charged in connetion with the violent dispersal of an anti-governemnt demonstration on November 7, 2007, and the breaking into the office of TV company Imedi.

Saakashvili is not in Georgia right now. He left after the presidential election in October, 2013, before the inauguration of President Giorgi Margvelashvili.

Carl Bildt, together with Władysław Sikorski, was one of the main initiators in December 2008 of EU’s Eastern Partnership program with Georgia.

In recent years he has actively cooperated with the government and political forces in Georgia in the leading the democratic processes in the country.

His recent statement caused outrage in the government. The foreign minister thinks it was out of order.

She says if there is presumption of innocence, which must be followed and she agrees with it, but on the other hand she thinks it is not correct to evaluate ongoing processes and give some qualification to it.

“Mr. Bildt qualifies process which hasn’t yet finished and no one knows where the finishing line will be. He says it is politically motivated,” she told journalists. “I think it is not right, because this is also certain type of pressure on the courts and over the whole process.”

The foreign minister underlined that the goal of the Georgian governemnt is to have as transparent legal processes as possible, when it comes to former officials.

“Our goal is not to leave unanswered questions, and what’s important, make sure that no-one stands above the law, no matter what positions they used to hold in the past.”

Konstantine Kavtaradze, ambassador of Georgia to Sweden, says that Sweden is an active supporter and lobbyist for Georgia. He says he cannot comment on Bildt’s tweet.

“What I can say is that Sweden is one of the active supporter of Georgia’s Euro-integration. This is a country which supports the Eastern Partnership and actively lobbies for Georgia in the EU, and which is one of Georgia’s largest donors.”

The ambassador said that the government of Sweden is notified about the current reforms in Georgia, also about the important trials.

Irakli Sesiashvili, MP from the Georgian Dream coalition, wrote on his Facebook page that he has been expecting Bildt’s concern.

“I’m even dissapointed that he was late,” he writes. “What if we establish an award for concern? Wasn’t he concerned with the report of the UN Human Rights Committee? I guess he hasn’t read it. He just reads headlines and gets concerned.”