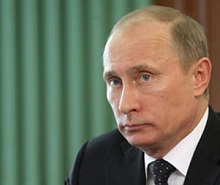 TBILISI, DFWatch – President Mikheil Saakashvili says it’s the Georgian nation the government of Russia has problems with, not the Georgian government, like it claims.

Saakashvili’s statement was a response to an appearance by Russian Prime Minister Vladimir Putin Wednesday, when he criticized one of his opponents because of his Georgian origin.

Putin had gathered together leading Russian editors for a frank, no-holds-barred-chat that ended with the microphones being cut during an exchange with the editor of independent radio station Ekho Moskvy, with the PM accusing the editor of pouring diarrhea over him.

Putin criticized Ekho Moskvy for supporting the deployment of the U.S. missile defense system in Georgia and said that if the anti-missile system were to be deployed in Georgia, Russia would be forced to aim its offensive weapons on Georgia.

The debate comes as Mr Putin is trying to build momentum for his election campaign in the midst of a wave of popular protest against election fraud. During the debate the Russian leader made a disparaging remark about the writer who is known as Boris Akunin (real name Grigory Chkhartishvili), saying that his critical attitude towards the government is related to his ethnic Georgian origin. Putin said Akunin is unable to objectively judge the Russia-Georgia war in August 2008, because he’s ethnically Georgian.

The ethnically loaded language lead Georgian president Sakashvili to respond: “If somebody stubbornly claims that Putin has problems with the Georgian government, the Russian Prime Minister poured very cold water over them.”

“When he said Akunin fights him because he’s Georgian, he expressed that he has problems with the Georgian being, the Georgian nation and not some Georgian government. This is something we already knew, but now the man said so himself. He repeated the same about the Caucasians today,” Saakashvili said.

According to the Georgian president, no-one in Georgia is scared of the Russian threats.

“All these panic statements are testimony that it turns out there was no peacekeeping mission [the Russian peacekeeping forces in South Ossetia before the war in August 2008, ed.] and that it was a Russian-Georgian military confrontation, which we were always saying, indicates in what situation this regime is in today,” the president said.