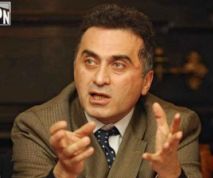 TBILISI, DFWatch–In Georgian Lawyer’s Association, some of the members have started procedures to dismiss their chairman.

The rebel members claim the reason is that Zaza Khatiashvili is a supporter of the former ruling party, the National Movement, and also that he was asking for financing in Russia.

Khatiashvili categorically denies these accusations and says he believes the people now making accusations against him want to have his position.

A few days ago, several members released a statement criticizing Khatiashvili. The members behind the statement, Nikoloz Mzhavanadze, Nugzar Birkaia, Grigol Gagnidze and Ana Zhenti, said at a press conference that it is necessary to start procedures to dismiss the leader during.

Mzhavanadze said the association has become politicized and transformed into an appendix to the National Movement. He also claimed that a few days ago, Khatiashvili sent a letter to Russian President Vladimir Putin requesting financing. He continued claiming that he won’t be surprised to find out that Khatiashvili is an ally of UNM in financial issues.

The rebel members held a press conference after Khatiashvili said he suspects the detention of Goga Oniani, lawyer of former Defense Minister Bacho Akhalaia, was politically motivated. He said the detention aimed at threatening the institute of lawyers in Georgia.

The Prosecutor’s Office charged Oniani with abuse of powers and falsification of evidence. He was released on a USD 12 000 bail.

He also denied having sent a letter to Putin.

“For five years, I have as a principle not gone to Russia, while everyone else has been there. When I arrived in Dvani [a village bordering the breakaway region South Ossetia] when barbed wire was installed, barely fifteen lawyers gathered, because no-one came with me. I got better introduced with Goga Oniani there,” he said during a press conference yesterday.

“Oniani’s detention was illegal and I would have been dishonest not to see that.”

Khatiashivli said he has been elected and confronts the feudal decisions of governments, and that he thinks the campaign against him is a result of his fight.

Khatiashvili says if some lawyers want to dismiss him, they can make a decision within the frames of law.