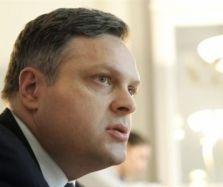 Giorgi Baramidze, member of parliament for the National Movement. (Interpressnews.)

Giorgi Baramidze floated the idea in a Facebook post last Saturday, but has not yet decided whether to make a formal proposal.

Baramidze later explained to DF Watch that the reason he wants to introduce the ban is that Russian news have turned into a ‘propaganda machine’, particularly when it comes to recent events in Ukraine.

News from Ukraine have been characterized by wildly differing versions of events, where media both in Russia and in the West have been caught spreading false information. The New York Times had to retract a claim put forth by the U.S. State Department about photographic evidence of Russian fighters in the southeast of Ukraine.

Russian media have also been caught lying: Channel One showed a photo of a dead civilian on May 16, claiming that it was from the fighting in Slavyansk. In fact, the photo was two years old and from an “anti-terror” operation in the Baksan region of Russia, according to the website Whowhatwhy.com.

Currently, Russian news channels are broadcast by all cable channels in Georgia. But bringing in a ban on Russian TV would not mean that much of a novelty to Georgians, who for many years were without access to news from Moscow. Although this was not laid down in law, and it only concerned news, not entertainment channels.

During the near decade the National Movement held power in Georgia, from 2004 to 2012, there was a gradual phasing out of Russian news, although no formal ban was in place, but entertainment channels were still available.

The idea that the National Movement wants measures against media that are one-sided, or perceived as propaganda, will seem laughable to many Georgians, considering the party’s track record in terms of media freedom when it held power. In March 2010, the channel Imedi carried a fake news report about another Russian invasion, which Time Magazine named one of the greatest hoaxes ever committed. Forensic examination later implicated then President Saakashvili in the decision to not warn the public that it was a hoax.

The tight, but informal, control the Saakashvili government held over distributors was the reason for a campaign in 2012 to force cable companies to carry all national TV channels to viewers. The campaign’s success was at the time seen as a step away from the National Movement’s indirect censorship.

Another part of Georgia’s media “war” was the setting up of a Russian language channel based on the Public Broadcaster, which is financed by state, in order to provide information to Russian-speakers in the wider Caucasus region. But the First Caucasian channel was closed in the last years of Saakashvili’s government due to lack of financing.

Baramidze’s proposal was rejected by the government coalition’s lawmaker Levan Berdzenishvili, who called it ‘nonsense.’ It therefore has little chance of seeing the light of day.

He thinks banning TV channels is incompatible with European values and that people should decide for themselves whether they want to watch Russian channels or not.

“Since the Soviet Union I have not heard that any issues have been solved by suppression of information and prohibition,” he says, adding that blocking the free flow of information is how the National Movement used to do things.

“This is unimaginable nonsense and an insult to Georgian viewers.”

Berdzenishvili says he doesn’t like Russian channels either, but he chooses not to watch them and solves the problem this way.

He says that although people may not like Russian policy, or Putin’s policy; the great Russian art, as represented by Fyodor Dostoevsky, and the Russian language itself should be left out of this fight.