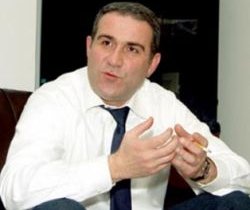 “The fact itself that there were several attacks on this person, while he was the so-called Prime Minister and now the so-called President and despite these facts, the investigations aren’t able to be investigated, indicate the fact that, this is committed not by a random political group but from the side of well-protected political representatives. It’s impossible in this case not to think that the Russian occupation forces play an important role,” Nugzar Tsiklauri, tells DF Watch.

The Kremlin’s aim is to see Abkhazia fully assimilated in Russia, Tsiklauri says. Both the previous leader, Sergey Baghabsh, and the present one, Ankvab, hold differing views from Russia, so he doesn’t exclude that these attack may be related to this.

“Abkhaz self-determination is secondary for them. The main thing here is that the Russian political, military and cultural influence would fully dominate in the region. By attacks like this political leaders are often warned that they should be conducting Russian policy more,” says Tsiklauri, whose formal title is Chairman of the Committee on Diaspora and Caucasus Issues.

In his view, after the occupation and combat actions on the occupied territories, the criminalization of Abkhazia happens not only on the everyday level, but on a political level too.

“The political war in Abkhazia does not happen by democratic ways, but through armed confrontation, threats, blackmailing, and there is high possibility that the Russian occupation regime is behind this attack,” the majority member says.

As DF Watch reported, the de facto president of Abkhazia Alexander Ankvab was today attacked while in his car. One of his guard died in the firefight, two wes seriously wounded. This is the sixth attack on him since 2005.

The General Prosecutor’s Office of the de facto republic launched a criminal investigation into the assassination attempt.

“He expressed his support for his Abkhaz counterpart, and offered Russia’s assistance in investigating the assassination attempt,” Apsny Press writes.

We are grateful for the Russian President Dmitry Medvedev’s offer of assistance in the investigation of this crime and, of course, accept it,” Ankvab’s spokesman Christian Bzhania says.

“We condemn this crime of terrorists, whoever they were,” the statement says.

The so-called government of Abkhazia does not yet see a ‘Georgian trace’ in the terrorist act against Alexander Ankvab.

“At the moment all the possible versions are under development, but we don’t yet see a ‘Georgian trace’ in this terrorist act,” Ankvab’s spokesman Christian Bzhania says, According to Russian media.