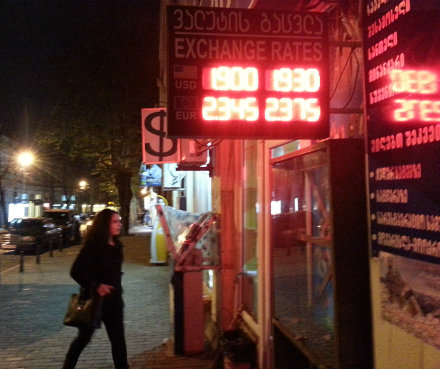 TBILISI, DFWatch–The currencies of Georgia and Armenia are recovering after a slump of more than 10% in the last few weeks.

The sight of money exchanges trading US dollars for more than two Georgian lari (GEL) set off a fervent debate in Tbilisi.

Many blamed the government for the fall of the lari, but Financial Times published a table which shows that the drop was almost exactly matched by a similar downturn in the price of Armenian dram, and quoted an analyst who explained the incident as an effect of Russia’s economy slowing down.

Prime Minister Irakli Garibashvili on Tuesday blamed the National Movement for attempting to create panic, but said there are external causes for the lari’s fall, such as a strengthening of the US dollar.

“We must also underline the difficult economic and political situation in the region, which has had an important influence on our trade balance.”

Georgia has a relatively small economy and the currency is allowed to float as investors on the foreign exchange market place bets on how the country will perform. The National Bank will intervene only in order to maintain a stable inflation rate, with targets set at 6% in 2014, and 5% in 2015.

Georgia and Armenia’s currencies have had an almost identical price swing in recent weeks. Analyst Timothy Ash in Standard Bank explained to the FastFT team that the fall of the lari and dram may have been caused by the fall in the Russian economy, which Georgia too has become more integrated with, following a recent thaw in economic relations.

Russia’s economic woes may also have led to less money being sent home by emigrants from the two countries, so-called remittances, he wrote in an analysis.

Garibashvili said he is confident his country’s economic growth will surpass 5% this year, referring to a projection by the World Bank.