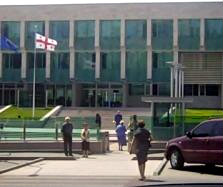 The Moduli building, where many ‘Kudi’ interrogations took place. (Interpressnews.)

TBILISI, DFWatch–The government in Georgia is beginning a debate about restructuring the Ministry of Internal Affairs and make the domestic intelligence a separate service.

Prime Minister Irakli Garibashvili said this after a government session on Wednesday.

Currently, 26 departments, 11 regional agencies, six public entities are subordinate to the MIA, which has about 35,000 employees.

Before the Rose Revolution in 2003, domestic intelligence was the responsibility of a separate body, the Security Ministry. But on initiative by former President Mikheil Saakashvili, the MIA took over these responsibilities and also became increasingly monolithic under its head, Vano Merabishvili. The most feared body became the Department for Constitutional Security, or ‘Kudi’.

It was during these years of National Movement rule that the ministry developed into something resembling the Soviet intelligence agency KGB – a secretive force which not only conducted mass surveillance against the people, but engaged in torture of regime critics and intimidation of political opposition groups with impunity, striking fear in the population.

Reforming the ministry was one of the election promises of the Georgian Dream coalition when it won an overwhelming victory in the 2012 election for parliament. Also the Garibashvili government platform contain promises to do something to reform the unpopular ministry.

Even though the Soviet style large-scale persecution of opposition has ended, pressure is on the coalition to follow through on its promises, which it hasn’t done yet.

Zakaria Kutsnashvili, parliament member from Georgian Dream, thinks the new ministry should be created on the basis of the MIA, but have other functions.

“It will take care of the country’s security but not public order or battling crime.”