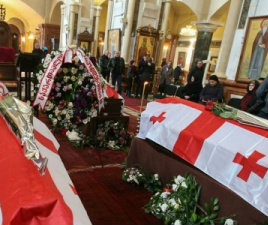 TBILISI, DFWatch–A public funeral was held Tuesday for four victims of a plane crash during the Abkhazia war more than twenty years ago.

The four were on a plane that was about to land in Sukhumi September 22, 1993, to evacuate head of state Eduard Shevardnadze.

92 people died as the plane blew up.

The victims buried on Tuesday were twins Nukri and Vasil Tsiklauri and their uncles Zura and Tengo Zaldastanishvili. They were among bodies exhumed at a cemetery in Abkhazia.

Among the many government members attending the funeral service at Sameba cathedral was also Refugee Minister Sozar Subari, who said work is continuing to identify the bodies of people who died in the Abkhazia war 1992-93.

12 more bodies have been identified and are expected to be sent to Georgia in January, Subari said.

“It is a great pain, but also a comfort for families that after 21 years their children are back and they know where their graves are,” Sozar Subari said.

His predecessor Darakvelidze said that this is in fact the only project which Abkhazians and Georgians have been working on together for three years and friendly relations have been formed.