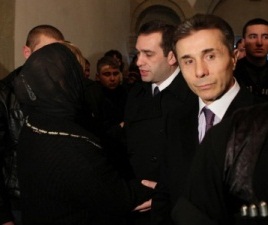 TBILISI, DFWatch — Sergeant Giorgi Kikadze, the nineteenth Georgian soldier to lose his life in Afghanistan, was buried today in Rustavi. This was the second public funeral organized for a Georgian soldier dying while taking part in ISAF operations.

His body was moved to Georgia on January 1, and today was moved to a church in Rustavi, a town 20 km south of Tbilisi, for the funeral.

Georgia’s Defense Minister, Prime Minister and the US Ambassador to Georgia attended the funeral on Saturday. Representatives of the majority and minority in parliament also attended.

“We should make it so that the service of our soldiers becomes more secure both inside and outside of Georgia,” Prime Minister Bidzina Ivanishvili said. 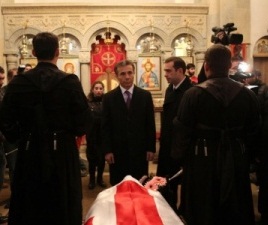 He added that the sergeant sacrificed his life for his country, but together with international forces he defended not only his own country, but also the security of another country, which is an honor for Georgia.

“The process itself that a Georgian soldier dies in Afghanistan, of course, raises questions; but I want to once more tell our society that the Georgian army’s participation in the global security system is something our country can be proud of,” the PM added.

The Prime Minister remarked that in the future, Georgia will not refuse to participate in the ISAF mission, but on the contrary, will strengthen its role.

“All Americans’ hearts are along with the family of the killed Georgian sergeant today,” Richard Norland, US Ambassador to Georgia said on Saturday. “Georgians, Americans or representatives of any other country are sacrificing themselves to attain the important aim of the world – peace and freedom.”

Defense Minister Irakli Alasania promised that the full range of security measures will be put in place for the Georgian contingent in Afghanistan to avoid such tragedies.

There details surrounding the sergeant’s death remain unknown to the public. Alasania said the investigation will soon be finished, and then the truth will be told.

He is the nineteenth Georgian soldier to lose his life in Afghanistan. Vako Avaliani, Adviser to the Defense Minister, told DF Watch today that this was the second public funeral of a soldier who died in Afghanistan.

Earlier, during Saakashivli’s government, the ministry used to issue a short statement when soldiers died in Afghanistan, expressing condolence to their families, but the process of moving the bodies to Georgia and the funeral ceremonies was kept out of the view of the public.

The Defense Ministry will pay the full expenses for the funeral, while the family will receive a compensation.

Giorgi Kikadze was born January 16, 1988 in Borjomi, a small city in southern Georgia. He had been serving in the army since 2009. After completing his military training, he joined the artillery battalion of the second infantry brigade. Before leaving to participate in the ISAF mission, he graduated from a six month training course in spring. He left for Afghanistan in October, 2012.