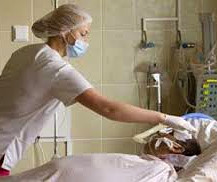 TBILISI, DFWatch–3,800 people in Tbilisi called the emergency number 112 only on Thursday as fear spread about the swine flu outbreak which has infected 9,000 people so far.

Three people have died after being infected with the H1N1 virus that causes swine flu.

Too many people called in to say they might have symptoms of the flu, and as a result, more than 300 calls went unanswered.

Health Minister Davit Sergeenko said Friday that over the last six months, there have been about 2,000 calls a day on average. About 1,200 of the calls received on Thursday were from people who said they had fever.

If people call the emergency service about having a fever, family doctors will visit them instead of first responders. But in order to help doctors handle the calls from the many people who are feeling ill, Sergeenko decided to lend his own car, as well as all other ministry available cars, to hospitals so that family doctors may more easily reach their patients. The cars will remain in the service of hospitals as long as necessary. Sergeenko’s own car will be at the disposal of the Republican Hospital in Tbilisi.

A further reinforcement is that two 24 hour family medical centers have opened in Tbilisi on Thursday, according to the health minister. They are located on Tsinamdzgvrishvili Avenue and Kiacheli Street.

Friday, the Education Ministry called on parents not to send their children to school if they have any symptoms of the virus. The ministry called on education facilities to provide regular ventilation of rooms, stricter rules for hand hygiene, and better cleaning procedures.

In case anyone develops symptoms of the virus while at school, a doctor should isolate the patient and send him or her home.

By January 20-21, the absentee rate in schools due to illness is not more than 16 percent.

The same day, the Health Ministry called on people who have signs of flu infection to call their family doctor at once.