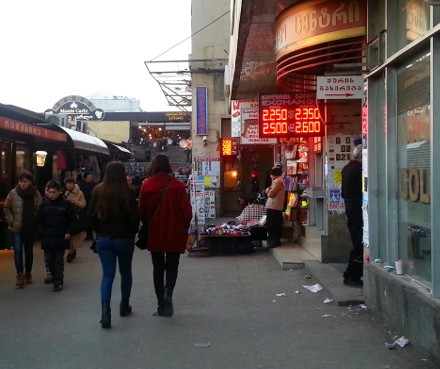 TBILISI, DFWatch–The government in Georgia has proposed to cut spending in order to deal with a drastic drop in the value of the national currency, the lari.

The lari began falling in November last year, and went from a level of 1.75 lari against the US dollar to 2.1971 laris on February 24, according to the National Bank figures.

But Tuesday evening, US dollars were much more expensive and advertised at 2.35 lari by street exchange booths in Tbilisi. This is an eight percent drop from day before, when the street price of USD was 2.18 lari.

The prime minister and other members of government see the depreciation as a result of external factors, but the National Movement blames the government for failed policies.

Economy Minister Giorgi Kvirikashvili explained on Monday that the plan is to reduce administrative expenses by 12 percent.

“This week we will introduced details of the reducing plan.”

Another part of the plan is to downgrade the economic growth outlook for 2015.

Prime Minister Irakli Garibashvili first suggested spending cuts a few days ago, explaining that it is necessary to reduce administrative expenses and have a rational budget spending.

Economic analysts think both external and domestic factors have influenced the lari rate.

Finance Minister Nodar Khaduri said Monday that the austerity measures, or “belt tightening” as it is called here, will not involve cutting the salaries of public employees, neither will it mean cutting down on the number of public employees.

“There are lots of other administrative expenses which it is possible to reduce.”