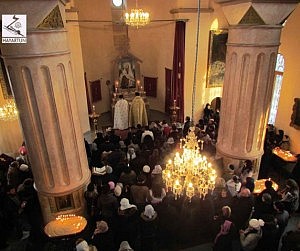 Surb Etchmiadzin Church in Tbilisi, where priests were attacked by a crowd last month.

TBILISI, DFWatch–A government official in Georgia has provided details about the internal work of a United Nations committee tasked with overseeing the human rights situation in member countries.

Levan Isakhanyan, Head of the Department of Legal Affairs, Relations with State Institutions and Inter-religious Cooperation, said members of the UN Human Rights Committee, which met in Geneva on July 7-14 to prepare a report about Georgia, expressed concern about incidents of discrimination in the country.

Also some specific incidents of discrimination against religious minorities were discussed, which were not included in the report presented by the government in 2012, which formed the basis for the report the UN committee published last week.

According to Isakhanyan, the deputy head of the committee said that it seems the Georgian government does not fulfill its obligations in terms of preventing discrimination against minorities.

He said the Georgian delegation, which was chaired by Minister of Justice Thea Tsulukiani, was asked questions related to the return of property belonging to minorities in Georgia that was deprived during Soviet times.

Another issue brought up was the Georgian Orthodox Church appropriating the property of religious minorities and the government supporting it.

They also discussed incidents that have caused offense against minorities and the government being inactive in stopping such incidents.

The delegation from the Georgian government spoke about a plan for how they see changes in attitude towards minorities in the country and about turning their rights equal to the Orthodox Church in terms of finances and legislation.

A representative of the Reconciliation and Civic Equality Ministry said the government achieved significant progress when it comes to the restitution of property of religious minorities and also regarding partly compensating property deprived during the Soviet Union. The government is also to create a state agency for religious affairs.