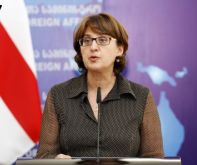 TBILISI, DFWatch–Georgian Foreign Minister Maia Panjikidze on Tuesday began an official visit to the United States which will last until May 30.

According to the Foreign Ministry’s press office, Panjikidze will hold meetings with representatives of different countries in the United Nations.

Among the persons she is scheduled to meet are Samantha Power, U.S. Ambassador to the United Nations, and Victoria Nuland, Assistant Secretary of State for European and Eurasian Affairs, and William Burns, Deputy Secretary of State.