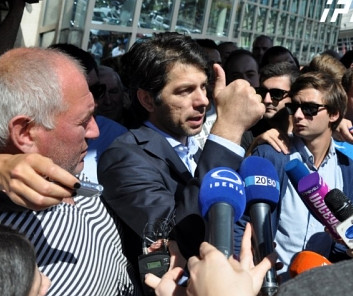 Levan Kobiashvili addressing the media after being elected new president of GFF. (Interpressnews.)

TBILISI, DFWatch–A lengthy and intense debate in the Georgian Football Federation Saturday ended in the election of Levan Kobiashvili as new president.

In the election to find his replacement, Kobiashvili competed against Revaz Arveladze and Mamuka Kvaratskhelia. The results were announced late at night Saturday, after a day of intense deliberation and clashes between supporters of Kobiashvili and Arveladze.

Kobiashvili claimed that one of his supporters was locked in a room at the Holiday Inn, where the GFF congress took place.

The delegate he was talking about, Gega Gobejishvili, was detained on Friday for possession of drugs, but was released on Sunday after being fined 500 laris (USD 209).

Kaladze later explained to journalists that he was there in order to meet with a member of UEFA’s executive committee, who was staying at the hotel. But the minister denied that he had come there to lobby for any of the candidates.

“People love football too much in Georgia and  I think all of this is understandable,” he said.