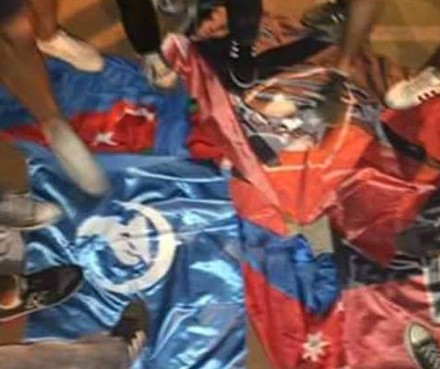 TBILISI, DFWatch–Georgian football fans are accused of having insulted supporters of the visiting team by trampling on an Azerbaijanian flag after a match between Dinamo and Gabala in Tbilisi on Thursday.

The UEFA Europa League qualifier ended 2-1 to the home team. Azerbaijanian media reported that Georgian fans attacked Azerbaijanian fans, took away their flag and trampled on it.

Earlier in the match, Georgian fans brought a large poster with a note “we remember Zaqatala and Kakh in 1921.” The historical province Saingilo, which is populated partly by Georgians, is today part of Azerbaijan. Georgian football fans have often brought up the history and claimed it is historical Georgian territory improperly attributed to the Azrbaijan Soviet Socialist Republic in early 1920s by the Bolsheviks.

The poster was taken away after efforts by UEFA, the online newspaper reports.

Dinamo Tbilisi yesterday issued a short statement saying that the incident took place outside of the stadium and they cannot take responsibility for it.

The club expressed hope that these incidents won’t endanger the friendly relations between the two states, also in terms of sport.

Saturday, Prime Minister Irakli Garibashvili expressed concern about the incident. He underlined the importance of the strategic partnership between the two states and said Georgia will not allow anyone to carry out provocative actions that threaten relations.

Garibashvili said he has asked the Ministry of Internal Affairs to study the incident and to take action if there is found to have been committed a crime.