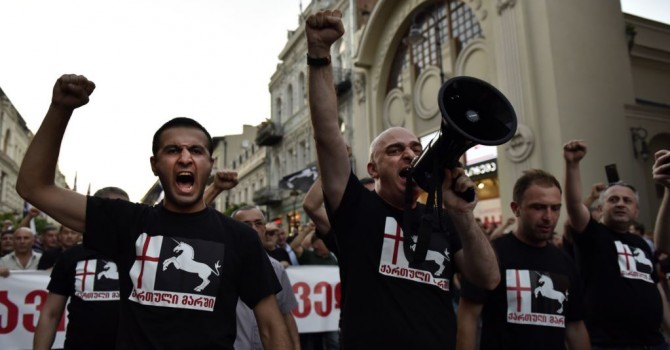 One of the proposals of the new party will be to note a person’s ethnicity in the Georgian passport.

Georgian March leader Sandro Bregadze said on Friday that the group has reached an agreement with other nationalistic organizations about merging and setting up a new political movement.

Bregadze, who in 2014-2016 held an office of Deputy Minister of Diaspora Affairs, said the new coalition, National Front, would be similar to Marine Le Pen’s Front National of France, which was renamed National Rally last year.

“We will take part in absolutely all political processes. We hope that nationalist forces will succeed in the [upcoming] election,” Bregadze said.

One of the first initiatives of the new coalition would be to demand to reintroduce a section in the Georgian passport which specifies an individual’s ethnicity, which was customary in Soviet and post-Soviet passports.

More details about the new coalition will be released after it holds a mass convention ‘in the near future’, Bregadze said.

Georgian March policy includes radical anti-immigrant, anti-Muslim rhetoric, protection of ‘family values’ and opposition to liberalization of drug policies. It became notorious in 2017 and 2018 when it held several anti-immigrant rallies in Tbilisi and vowed to set up vigilante groups to patrol Tbilisi’s streets to looking for ‘suspicious foreigners’. That time it also announced its plan to turn to political party but both these plans haven’t materialize so far.