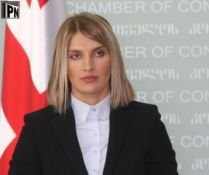 Natia Mogeladze's party finance unit almost were given internationally banned retroactive powers last December in what parliamentarians said was an editing error, but has nonethesame carried out a retroactive investigation which found two instances of party donations which would have been illegal today, but weren't when they took place. (Photo: Interpressnews.)

TBILISI, DFWatch – As a new chapter unfolded in the saga about Georgia’s party finance reform, the Chamber of Control Monday made a request which seemed an implicit criticism of its critics.

The CoC was given retroactive powers in a reform last December, but since such powers are banned by international treaties as well as the Georgian constitution, this promptly led to objections from groups that monitor Georgia’s reform process.

Eventually, the retroactive powers disappeared from the text of the law through an editorial modification.

But Monday the CoC made an announcement apparently as a way of showing how the powers would have been useful. Head of the party finance control unit said it had found errors in donations to two organizations: the ruling National Movement and Bidzina Ivanishvili’s Georgian Dream.

When it comes to the former, it had found that 95 848 lari, which the ruling party says is a donation from five people, in fact came from only one source, which then spread the money out among those five which were named as donors.

As a “we told you so” to the opposition, the CoC in its statement says it cannot intervene, since it does not have retroactive powers. The donation was made last year.

But the Chamber advises the ruling party to surrender the amount to the state, in keeping with how the rules would have been applied, had such a transfer taken place today.

But the Georgian Dream, on the other hand, refuses to hand over a similar transfer.

It concerns a donation of twenty thousand lari, which the CoC says is suspicous because the person who gave it has an annual salary of only twelve thousand. The CoC says the donor received a premium from his employer, Ivanishvili owned company Kartu Mshenebeli, and three days later gave half of the money to Georgian Dream.

CoC says this is a clear example of hiding the true nature of a donation by transferring money via an individual person.

The head of the financial monitoring service Natia Mogeladze said Georgian Dream should give the twenty thousand lari back to Kartu Mshenebeli.

This is the second time the CoC accuses Georgian Dream of breaking the newly imposed rules. At the end of January, Georgian Dream returned 1.1 million lari which authorities said were received through a fraudulent business deal.

But this time, the movement says it is not going to comply.

In a statement released February 20, Georgian Dream noted that the individual transferred the 20 000 lari donation in full compliance with the law. The statement says he is a very qualified employee, whose monthly salary is 5 000 lari in several companies in which he is working, so the 40 000 laris amount award is not unusually high for him, as the Chamber makes it out to be.