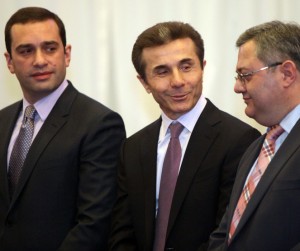 Tentatively terming himself 'head' of the political coalition, Georgian opposition financier Bidzina Ivanishvili today presented the main politicians who will be working with him in the coming election campaign. (Photo: Interpressnews.)

Ivanishvili’s citizenship was revoked by President Mikheil Saakashvili at the outset of his quest for power, and unless he succeeds in reclaiming it, he won’t be allowed to engage in politics ahead of this fall’s parliamentary election.

The charitable businessman solved it today by saying he will ‘chair’ the political council of what is now being called ‘a political coalition’.

It includes his own soon-to-be-established party, Georgian Dream – Democratic Georgia, the Republican Party, the Free Democrats and the National Forum.

Also flanking him at today’s press conference were Conservative front man Zviad Dzidziguri and Koba Davitashvili from the People’s Party.

Ivanishvili said a founding congress for his new party will be held at the end of March or beginning of April, 2012. An initiative group was unveiled last week. 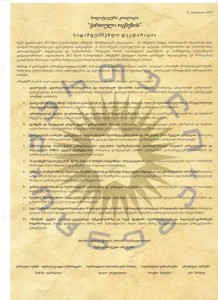 One of the members of the group, Nodar Khaduri, was announced today as the Executive Secretary of the Political Council, which also will consist of Davit Usupashvili, Irakli Alasania, Kakha Shartava, Zviad Dzidziguri, Davit Berdzenishvili and Aleksi Petriashvili.

“There still are vacant places in the council,” Ivanishvili said.

He explains that the subjects of the coalition are today formed as one team. Accordingly, Bidzina Ivanishvili appealed to society and journalist that from now on they should be reviewed as one team.

Members of the coalition today passed a founding declaration, which defines their political goals in 12 points.

The founding declaration of the political coalition says that the parliamentary elections of 2012 are an important crossroad, as a result of which there should start establishing a multiparty democracy in Georgia.

The declaration says that after Georgian Dream comes into power as a result of the free expression of people’s will in Georgia, the party aims at forming a domestic and foreign policy.

Special attention is given to the importance of establishing the Western values and creating appropriate conditions for the country’s economic development.

Even though President Saakashvili revoked Ivanishvili’s citizenship, the two had a close relationship before, and Ivanishvili has financed many projects in Georgia, including many that were attributed to the Georgian government.

Ivanishvili went to court over the decision to revoke his citizenship, but lost. Meanwhile, he said he would renounce his Russian and French citizenships, only the former of which was actually renounced, in order to remove the reason for revoking the Georgian citizenship in the first place; that he had acquired double citizenship without informing authorities.

Simultaneously pursuing another legal avenue, he also appealed to the president with a request to grant him Georgian citizenship. The president has still not answered this request. Ivanishvili’s lawyers say the president has no grounds for refusing the request and has to answer in the near future.