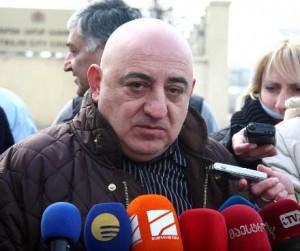 TBILISI, DFWatch – The former member of parliament accused of planning a coup d’état in 2007 was released on bail.

Georgian authorities accuse Valeri Gelbakhiani of having hatched the plot together with Badri Patarkatsishvili, a now deceased billionaire who owned a TV station and supported an opposition uprising during a period of major unrest in the country.

As the plan was presented by the Georgian Interior Ministry, it would have involved an attempt at fomenting more unrest in various parts of the country, as well as trying to sway law enforcers to the rebel side through bribes.

Gelbakhiani has been abroad, but a court sentenced him absentia in 2008. He was arrested yesterday as he crossed into Georgia from Armenia with his son, apparently in an attempt to visit his mother, who lies gravely ill in a hospital in Sachkhere, a rural area in central Georgia.

The former MP was released today against a bail of 50 000 Georgian lari. The judge took into consideration Gelbakhiani’s health condition.