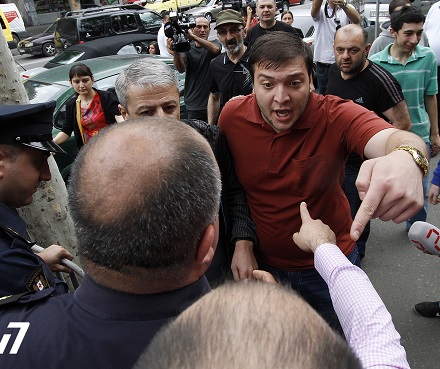 Protester outside the National Movement’s primary in Tbilisi, July 28, 2013. (Interpressnews.)

TBILISI, DFWatch–The Georgian Dream party has expelled one of its members and warned two of them in relation with the scuffle on July 20 in Zugdidi during the National Movement’s primary election.

Georgian Dream Democratic Georgia on Monday issued a statement saying that the party condemns the violence on July 20 and distances itself from the incident in Zugdidi, in western Georgia.

The statement says that Georgian Dream didn’t participate in the rally against UNM, but the party has found out that individual members participated in the incident in Zugdidi.

“Georgian Dream’s political council made a decision about these persons. Those are Gaioz Moniava, who received written warning; Lasha Gogia – also received warning and Zaal Todua, who was dismissed,” the statement reads.

The party warns it members to avoid aggressive actions; otherwise the party will employ ‘the most strict disciplinary methods.’

United National Movement held six conferences in different regions of Georgia in order to select its presidential candidate. During the last three conferences – in Tbilisi, Zugdidi and Batumi – there were protests outside. Almost 20 people were detained during these protests, but all of them were released for a 100 lari fine (USD 60).