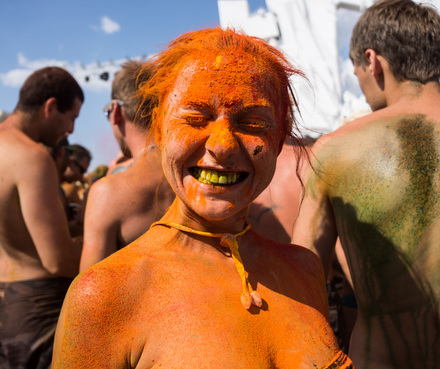 KaZantip will be organized in Anaklia from August 20 to August 30.

TBILISI, DFWatch–Georgia’s Orthodox Church is against holding the electronic music festival KaZantip in Georgia, claiming that it will ‘harm’ Georgians.

The ten-day music festival used to be held in Crimea, but due to the Russian annexation it will this year be held in Anaklia, on the Black Sea coast.

The youth festival has opponents among radical religious groups in Georgia.

On Friday, the Georgian Church, which is the most influential institution in the country, issued a statement saying that it is not right to hold the festival.

The Church also writes that people never voted for the development of the country ‘in this way.’

“Georgia is a country of ancient culture and it cannot become an encourager of promiscuity.”

The Republic of KaZantip will be organized in Anaklia from August 20 to August 30.

Opponents have planned a protest rally on Saturday evening in front of the government office demanding that the festival is cancelled. Some priests and their followers plan to join the rally after Saturday’s prayer.