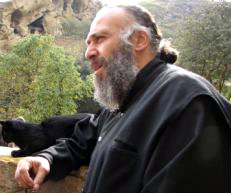 TBILISI, DFWatch–Clerics in Georgia plan a big demonstration against the music festival KaZantip, and have started information work and preparing the Church and clerics.

Archimandrite Antimoz on Sunday told Interpressnews that the rally is going to be peaceful and will take place in Anaklia, where the festival is planned, a few days before it starts.

He is convinced that people do not know what KaZantip means.

“I also thought it was just entertainment and then I seriously looked into it, read their constitution, saw footage and I was astonished,” he said. “This is absolutely freedom to everything, to drugs, sex, and pornography.”

He says that despite promises from organizers that there will be no drugs, it will be devil worship.

“They have their own constitution and rules, their own president, who says he is a magician.”

Archimandrite recalled the events of May 17, 2013, when a small group of activists tried to peacefully mark the International Day against Homophobia but were attacked by thousands of conservative activists led by Orthodox priests, by saying that it was an ideology foisted on Georgia, just like KaZantip.

Now the church turns its focus toward preventing the planned music festival in Anaklia. The Church’s leadership, the Patriarchate, announced its view in a statement saying it is against holding it in Georgia.

KaZantip used to be held in Crimea, but was moved to Georgia after the Russian annexation of the peninsula.

It has form of a republic with its own constitution and president, and visas are required to enter the compound. It will be held in Anaklia from 20 to 30 of August.