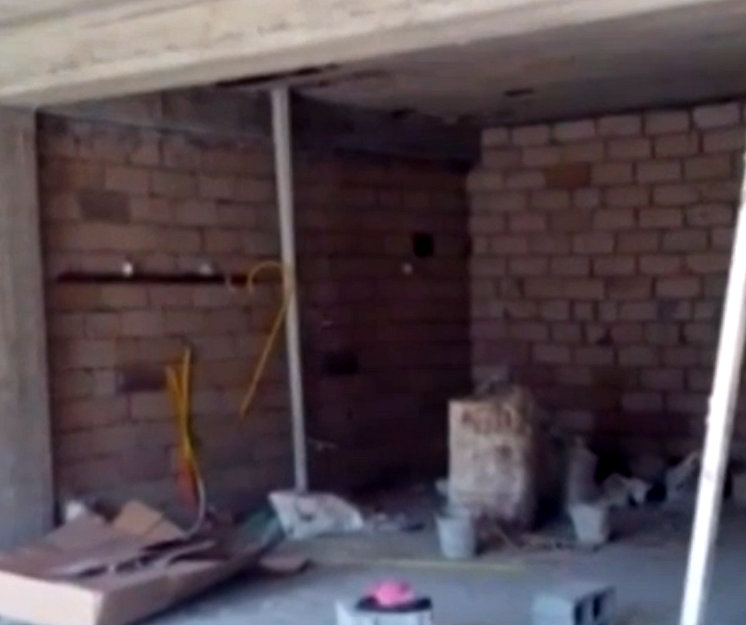 The planned homeless shelter. (Channel One.)

TBILISI, DFWatch–The Georgian Church, the Patriarchate, is against the opening of a shelter for homeless people. The plan has been proposed by the organization Identoba, which protects the rights of LGBT people in Georgia.

A private individual donated a building to Identoba in the end of October, in order to organize a shelter for homeless people in Tbilisi. The organization announced to have refurbished building for the most vulnerable and homeless families in order to avoid the upcoming cold winter.

The building has been empty for several years. It is 80 square meters and is located in the Bagebi settlement. The building is not ready for use yet, but needs refurbishing and installation of heating and other things.

Identoba appealed to local non-governmental organizations and everyone who wishes to support and help preparing living conditions for the vulnerable families.

The Patriarchate responded to Identoba’s initiative saying that the organization protects the rights of sexual minorities, ‘which may have a negative influence on children living in the shelter.’

“Naturally, there is a danger that their ‘care’ for minors and such lifestyle may be encouraged or they may follow same sexual orientation, which is a violation of the private lives of children,” the Patriarchate’s statement reads, adding that this is unacceptable for the church and for ‘the whole society.’

The Patriarchate, which received USD 15 million in state financing this year, says the government, not Identoba, should take care of homeless children.

Identoba later stated that the organization has been forced to stop work on the shelter because of the ramifications of the Patriarchate’s statement. The organization says people living in the same settlement called them and threatened that they ‘won’t allow placing a shelter in this building.’

“They told us that if we would open shelter they would create problems for its functionality and its inhabitants every day,” the statement reads, adding that even though the organization believes initiative is legal and there is no law prohibiting them from opening a shelter, the organization plans to suspend the process as they can not guarantee the safety of those who would be living in the shelter.

Identoba collected about 1 000 lari (USD 600) in donations from different people and will give the money to the people they were planning to locate in the shelter.

Health Minister Davit Sergeenko said on Wednesday that offering a shelter is not enough, but the methods of childcare must be compatible with international declarations.

He said the government welcomes any initiative and is ready to cooperate to help homeless children, but such initiatives must be within the frames of international experience and international law.

“But this shouldn’t happen mechanically, that ‘I am building a home and will let children in’ – this is against international convention – deinstitutionalization and basing childcare methods,” he said adding that if these conditions are met, the ministry will cooperate.

Irakli Vacharadze, Chairman of Identoba, said at a press conference at Pirveli, that it is hard to respond to people who claim that it is better that people die in the streets than Identoba helping them.

He also drew attention to a statement by Eka Beselia, chairman of parliamentary committee on human rights, who said that only government has right to build shelter for socially vulnerable.

“Do you look into legislation every time when you help someone in the streets?” Vacharadze asked, adding that Beselia’s statement is ‘legal nonsense’.

The Secretary for Georgia’s Catholicos Patriarch, Mikael Botkoveli, who was the first to respond to Identoba’s initiative, said in an interview with Telegraph.ge that people must support the church and protest against this initiative together with the church.

“There are diseased people in this organization. How can we let them take care of children? This is terrible. What can happen worse than this?” he said, adding that everyone including the ombudsman and those who will support the organization’s initiative will become ‘subject of criticism.’

“This group is so much discredited that everything is expected from them. They will use all sources to attract attention especially from foreign donor organizations.”

The Ombudsman’s office issued a statement which says that a number of people have appealed to the office saying that their main problem is that they are homeless. According to the statement, Georgian legislation obliges local governments to provide them with a place to live, but there is no state strategy for doing this, and in most cases the obligation is not fulfilled.

Tolerance and Diversity Institute claims that the statement of Botkoveli is an insult against members of Identoba and helps to further spread homophobic prejudice, directly threatening everyone who assist in establishing the shelter.

“We must recall that a few months ago, a statement by the Patriarchate about the international day against homophobia was followed by violence led by clerics. There is a danger that such irresponsible statements may lead us to the same results.”

On Wednesday, the person who donated the building to Identoba to make a shelter, told journalists that he or she has gone into hiding out of fear of harassment by neighbors.

The person says unknown people came one evening and knocked loudly on the door.

“I understood that this must be related to the shelter issue and I didn’t open door. It repeated itself three times,” the person said, adding that a friend helped with the escape. He or she is now unable to return home and has switched off the mobile phone, explaining that people probably recognized the building from the TV news.