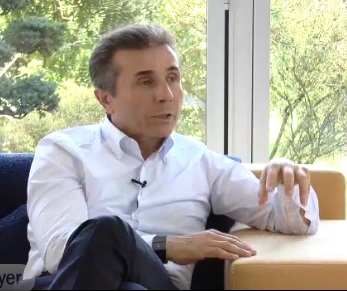 Ivanishvili left politics after the presidential election in October, 2013. He said in an interview with Kviris Palitra that he thinks the government is really effective and the most effective person in the government is Prime Minister Irakli Gharibashvili.

But his assessment of Margvelashvili, whom he handpicked for the post, is that he became disappointed with him in March this year.

There has been some friction between the president and the prime minister since the split became apparent. One way this manifests itself is that the PM regularly tries to take away some of the president’s powers by going to parliament and amending some law.

Another sign of the division is that the president doesn’t seem to play by the government’s rules, but is going it alone. An example of the latter is Margvelashvili’s decision to attend a climate summit at the United Nations, despite a number of attempts by the government to persuade him not to go. Also the PM is attending the summit, so Georgia will be sending two delegations to the same summit.

In the exclusive interview, the ex-PM said he thinks that if Georgia is a parliamentary republic now, there shouldn’t be any question about who should attend a UN conference. He said that he has seen a list of who will attend the summit and from parliamentary republics it is mostly prime ministers.

“The meeting from which he [Margvelashvili] got an invitation is a low rank meeting. By the way, last year [Foreign Minister] Panjikidze was also invited to the Climate Change summit, but she didn’t want to go,” Ivanishvili remembered. “[Deputy Foreign Minister] Zalkaliani should have gone, but in the end Panjikidze went there, as she had other business there too, but no-one thought to tell me to go or the president to go there. This is reality.”

He said he thinks that ‘it won’t be beautiful’ to send two delegations from one poor country, but ‘this man’ continues the competition.

“Isn’t it really simple to see that it is the prerogative of the PM to go there?” he says, adding that a conflict between the president and the PM is will benefit the opposition.

Margvelashvili sees the government as a ‘competitor’, he claimed, and tries to interfere with them, which in the end harms the image of the country. Ivanishvili said he thinks the real competitors are unemployment, territorial integrity issue and foreign policy.

Again, Ivanishvili recalled Margvelashvili’s decision to move the government office into the president’s palace, which was built by Saakashvili. He criticized the move earlier.

“The government is not guilty when he moved into the palace of the president and never asked any member of the coalition anything, when he knew their negative attitude and he also had a negative attitude to it,” he said. “He barely decided not to veto the draft which he hadn’t even read, didn’t remove status of ‘top secret’ for the Prosecutor’s Office for a month.”

Generally speaking about the executive government, the ex-PM said he thinks it is effective, especially the PM.

Ivanishvili, who brought together the Georgian Dream coalition and in fact formed the whole government, remained prime minister for about a year and then left, but many people think he still remains the real decision-maker in the country and is controlling the government from behind the scenes.