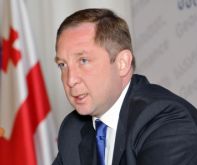 TBILISI, DFWatch–Georgia’s State Commission for NATO Integration on Monday approved the annual national program (ANP) for 2014, which will be presented to NATO.

After the document has been signed by the prime minister, it will be presented to NATO in Brussels at a session of the NATO-Georgia commission by Petriashvili’s deputy and the deputy defense minister.

This year’s document is about obligations to improve the protection of human rights and improve political processes in Georgia, according to Petriashvili. It also deals with reform in defense, legal and other reforms.

Georgia has been implementing ANPs since 2009, reforms that are aimed at getting closer to NATO.

“This week, the program will be approved by NATO. This document includes all the areas, main priorities, obligations, which were outlined during the working process of government bodies, parliament and were agreed with NATO partners,” Petriashvili said, adding that it also reflects plans for future cooperation with NATO.