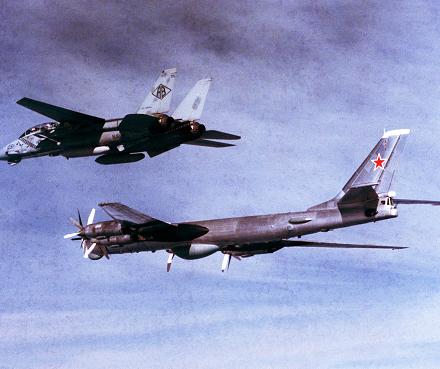 A Bear, or Tupolev Tu-95, (right), the iconic Russian bomber and surveillance plane during the Cold War.

TBILISI, DFWatch – Georgia will no longer let Russia conduct observation flights over its territory, and has suspended its obligations under a post-Cold War treaty which provide countries with mutual openness in each other’s military activities.

Open Skies is a treaty adopted by 27 OSCE member states on March 24, 1992, in Helsinki. The purpose of the agreement is to promote openness and transparency in military activities, monitoring compliance with existing treaties in the field of arms control and strengthening security through confidence building measures.

“This move by the Georgian side responds to Russia’s cessation of implementation of certain Treaty obligations, which began in 2010 and subsequent attempts of Russia to exploit Open Skies Treaty for the purpose of legitimizing the so-called independence of Abkhazia, Georgia and the Tskhinvali region/South Ossetia, Georgia,” the Georgian Foreign Ministry said in a statement.

Georgia has informed the other 34 current participants in OSCE about the decision, which was made on April 3.

The Foreign Ministry writes that Georgia will continue fulfilling its obligations under the Open Skies treaty in regards to other participant countries.

“In 2010, the Russian side, in violation of the open Skies Treaty, imposed flight restrictions on other States Parties to the Treaty with reference to Article VI, Section 2, and Paragraph 2 of the Treaty. In particular, Russia used as pretext the provision of the Treaty, which precludes observation flights within 10 kilometers of the borders of those states, which are not party to the Treaty. Thus, Russia refused to allow the observation flights over its territory to fly within 10 kilometers of the occupied regions of Georgia, asserting that those regions constituted states, which were non-parties to the Treaty. By purporting to rely on Article VI, Section 2, Paragraph 2 of the Treaty the Russian Federation has deliberately and improperly restricted the right of all other States Parties under the Open Skies Treaty, denying them full territorial access to the Russian territory as required by the Treaty.”