Georgia to listen more to CoE advice when changing laws

Georgia to listen more to CoE advice when changing laws 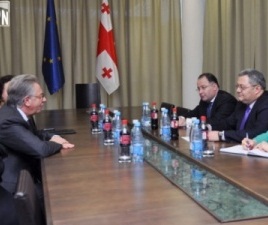 TBILISI, DFWatch — The Georgian Speaker of Parliament promises that his country will not adopt constitutional changes that are not in line with recommendations by the Council of Europe’s Venice Commission.

After meeting with Venice Commission President Gianni Buquicchio, who is currently on a visit to Georgia, Parliament Speaker Davit Usupashvili said the practice of adopting major legislative amendments without following the commission’s recommendations is a thing of the past.

He told journalists after an hour-long meeting that the parties agreed that every constitutional amendment Georgia makes will be done in partnership with the Venice Commission, and that the commission’s experts will play an active role.

Usupashvili noted that parliament soon will create a commission to go through the whole constitution. It will be made up of members of parliament, other politicians, non-governmental organizations and representatives of the Venice Commission.

Two proposed amendments are currently going through a public hearing process, dealing with removing a section which defines the location of parliament and secondly, to limit the president’s power to dismiss government while expanding the time frame during which he may dissolve parliament.

The Georgian parliament recently adopted a law on amnesty, releasing more than 4 000 prisoners. It is still being criticized for this by the government’s opponents, which have warned of a return of the old mafia.

Gianni Buquicchio, said Tuesday evening on Maestro TV that he regrets that the law on amnesty was adopted before the Venice Commission could state its position on the matter, but he added that he understands the situation of the people who were released from prison.

After Wednesday’s meeting, Usupashvili said the Venice Commission understands well why it was necessary to quickly adopt the law on amnesty.

“We spoke about this issue. He said it would have been good to have the conclusion of the Venice Commission [first], but he also said that because of the situation in Georgia it was necessary to make decisions soon,” he said.

Usupashvili promised that Georgia will follow the recommendations of the commission when amending the election code, the constitution and the law on the courts.

The delegation from the Venice Commission arrived on Tuesday and will leave February 1. Delegation members will meet with the prime minister and other government officials, representatives of NGOs, and the chair of the constitutional court.