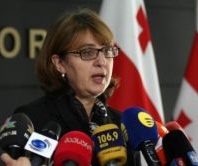 TBILISI, DFWatch — The Ivanishvili government is replacing Georgia’s ambassadors to 18 countries, and has sent the list of candidates to President Mikheil Saakashvili for approval.

After he has signed it, the list will be sent to parliament to get its approval, which may take up to a week.

Some of the ambassadors that are replaced have served out their term, while others have resigned because of incompatibility with the new government’s policy.

Earlier this year, the Foreign Affairs Ministry asked the president to recall a number of ambassadors. In the government’s opinion, they rather served the National Movement party’s interests than the country’s.

In mid-January, the president’s administration published the letter in which the Foreign Affairs Minister made that request.

In her letter to the president, Maia Panjikidze asked to call back a number of ambassadors, including those to the US, the UN, Belgium and the EU, the Council of Europe, UK, Germany, Bulgaria, Lithuania, Azerbaijan, Kazakhstan, Turkey and to China.

Earlier, the president’s administration published a brief statement, in which the president says he agreed to dismiss a number of ambassadors to foreign countries, but without specification.

Under Georgian law, only the president has the power to appoint or call back ambassadors.