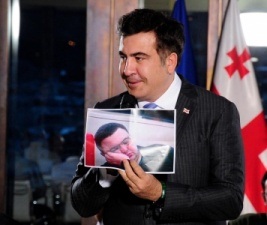 TBILISI, DFWatch — President Mikheil Saakashvili says that the governing Georgian Dream coalition is unable to gather together a constitutional majority in parliament – that’s why they are threatening the opposition.

Saakashvili said this while visiting Kutaisi, the second largest city after the capital, on Wednesday to meet with the civil society representatives.

Two constitutional amendments are under review in the country: one is about the president’s right to dismiss the government and parliament. The other one is to remove an article from the constitution which defines the location of the parliament.

According to Georgian law, 100 votes out of 150 are needed to pass constitutional amendments, which leaves the governing coalition nine votes short. Despite this, they hope they will be able to gather the necessary votes and pass the constitution changes, which will probably happen in February.

At the moment, parliament is located in Kutaisi. The idea was the president’s own, and it was criticized for not being well enough founded in arguments. The executive branch of government is based in the capital, while parliament lies 250 km away. Those in favor of moving parliament back to Tbilisi say that traveling back and forth between the two cities is interrupting their daily work and increasing their expenses.

The former ruling party and other government opponents are trying not to let parliament be moved back to Tbilisi. In his speech, the president said that the ruling party doesn’t have enough votes to fulfill its wish to move parliament back and therefore has begun to threaten the opposition.

As example he mentioned a new criminal prosecution against Giorgi Sibashvili, currently member of parliament, and former deputy governor of the Kakheti region.

The Finance Ministry informed that Sibashvili had abused his powers and is suspected of embezzlement in connection with 11 000 lari having disappeared during cleanup work in the storm-affected region.

The president on his part claims that Sibashvili is being threatened.

Davit Bakradze, spokesperson for the National Movement also said recently that the opposition National Movement is being bullied by Georgian Dream. He was referring to the interrogation of two UNM members; Tariel Londaridze and Kakha Butskhrikitdze.

“Parliament in Kutaisi is a much larger idea than just parliament of Kutaisi. This is the idea that politics belongs to the people in Georgia and not only to only a bunch of people living on one street,” the president said.

President Saakashvili presented a photo of a sleeping Gubaz Sanikidze, member of parliament from the majority Georgian Dream, to guests in Kutaisi during his speech noting that Kutaisi’s ‘chosen one’ is sleeping, but the local society should be awaken in order not to let the parliament be taken away from Kutaisi.

“Important issues are being decided for Kutaisi today,” he said.