‘Georgia should convince Russia NATO is not a threat’

‘Georgia should convince Russia NATO is not a threat’ 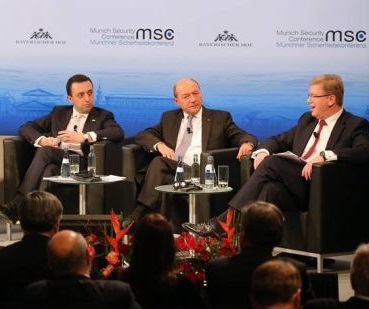 TBILISI, DFWatch–Prime Minister Irakli Gharibashvili says Georgia should assure Russia that its aspirations to become member of NATO and the EU is not a threat to Russia.

He said this in a speech during one of the sessions at the Munich Security Conference.

The PM said Georgia just tries to become a better country, to become strong, free and European country. He believes that it must be Russia’s interest too – to have strong, stable neighbor in the Caucasus region.

Gharibashvili spoke about what the government has done to improve relations with Russia after the parliamentary election in 2012. The new government has completely changed its attitude and rhetoric to Russia, he said and reminded listeners about the new format of talks between the PM’s special representative in Russian relations and Deputy Foreign Minister of Russia. The PM also recalled that Georgian export to Russia has been resumed.

“We tripled export to Russia. It has reached USD 60 million and we have done everything to normalize relations with the Russian Federation,” he said, adding that Georgia has done its best in this regard, but has only received provocations in return, mentioning the installation of barbed wire and fences in Georgian villages close to South Ossetia and moving the borders.

He said Georgia decided not to boycott Winter Sochi Olympics and that it was a difficult decision to make.

Irakli Gharibashvili once again reaffirmed Georgia’s unchanged foreign course and aspiration to NATO and EU. He focused on issues concerning integration with NATO and the European Union and expressed hope that Georgia has opened a new page in Georgia-EU relations by signing the Association Agreement.

The Georgian PM continued expressing hope that Georgia will sign the Association Agreement in August, as was said by different EU leaders earlier.

He also touched upon economic issues and said economic growth unfortunately was really low in past year, but this year the country expects 6.2 percent growth.

Within the frames of the conference in Munich, the PM met with US Secretary of Defense Chuck Hagel. The parties discussed the current situation of relations between Georgia and the USA and prospects of cooperation. Particular attention was paid to defense and security cooperation. Georgia’s contribution to NATO-led ISAF mission in Afghanistan was also discussed.

He also met with the Polish and German foreign minister and the German chancellor’s foreign and security policy adviser.