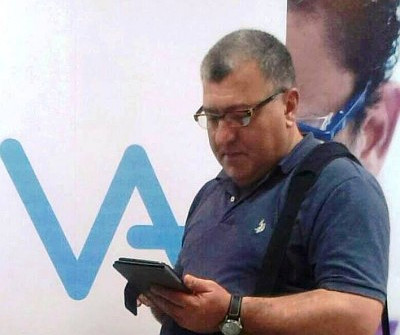 TBILISI, DFWatch–Strangers Monday posted one more video online showing sex scenes involving a public person. The Youtube video was accompanied by a warning that more videos will be posted soon. Youtube was cut off for some time for Georgian users.

The latest video had a note attached saying that it depicts the private life of a politician, and another text was a threat to several other named politicians, calling on them to resign before March 31, otherwise videos of their private life will be published.

The video was removed from Youtube. The Prosecutor General’s Office questioned Lasha Berulava, head of the information service at Abkhazetis Khma (Voice of Abkhazia). As he walked in to be questioned by prosecutors, Berulava told journalists that he had to answer questions related to the video, because Monday morning at 07:30am, the video was uploaded by strangers to his Facebook page.

Berulava explained that he made a screenshot and saved the name of the page which posted the video to his profile on Facebook. He brought this material in order to show to prosecutors.

“In the morning when I saw the video I made a screenshot, deleted it and called the patrol police. They showed up immediately. I gave them the information I had and then investigators came, questioned me and summoned me to the Prosecutor General’s Office,” he said.

For a few hours, Youtube was blocked for Georgian users of Silknet and Caucasus Online, two of Georgia’s largest internet providers. Youtube was also blocked for about 40 minutes on Friday, when the first video was posted, and now Georgian users are dissatisfied that it is so easy for the government to block any website when they want to.

Previously, the government blocked the entire site wordpress.com for Georgian users because it hosted a blog used by activists for the terror group Islamic State, or ISIS.

The first video, showing sex scenes involving a politician, was posted on Friday. The text of the video read that it depicts the life of a politician from the opposition. An investigation was launched under article 157 article of the Criminal Code. Violations of this sort may be punished with up to three years in prison.