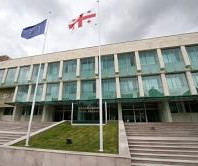 TBILISI, DFWatch–A video depicting the sex life of a politician from the opposition was Friday posted on Youtube and privately sent to several Georgian journalists by e-mail.

Some of the media outlets disclosed the name of the person in the video, but later apologized.

The speaker of parliament proposed setting a one million lari reward for help finding the person responsible for filming and releasing the videos.

Youtube was unavailable to some Georgian users for about 20 minutes. After a while, the video was deleted from Youtube. It is not clear who disabled Youtube, but Justice Minister Thea Tsulukiani wrote on her Facebok page that the security services were trying for more than 40 minutes to remove the video.

The Prosecutor General’s Office opened an investigation into the distribution of a video material depicting personal life under article 157 of the Criminal Code.

The State Security Service informed journalists that the video has been removed from Youtube and they continue work in order to identify who uploaded and spread the video on the Internet.

Friday evening a crowd gathered outside the government office to express their protest, including organizations, journalists and others.

“We think that spreading this video has connection to the activity of the State Security Service and therefore both political and legal responsibility lies with the government,” Women’s Movement which organized the protest wrote.

They demand that the PM, the Interior Minister, the Prosecutor General’s Office and the State Security Service answer questions related to the video and its authenticity, which is still under question, and who released it.

“They should be held responsible, and unfortunately we expect that since it is an election year, more videos will be published,” one of the participants, Baia Pataraia, told journalists.

Speaker of Parliament Davit Usupashvili said on Friday that launching an investigation and expressing concern is not a proper reaction against degenerated people, who created, edited and stored those videos and the published them.

He called on the Prosecutor General’s Office, the police and security services to admit that traditional methods are not an effective way to eliminate this problem. He proposed using tools which are used to fight terrorism.

He recommended appealing to international anti-terrorist networks for assistance in order to determine the origins and other details of the video.

“Secondly, set a reward, one million laris, and complete a security guarantee for the people, who will help investigators find the perpetrator. Parliament will be ready to help with finding budget moneys for this,” he said.

Friday night after the rally Erekle Deisadze, an artist and activist known for often addressing political and social issues, held a performance at the government office by screening Gaspar Noé’s film Love, which Tbilisi City Court decided is pornography a few days ago. The Interior Ministry launched an investigation for spreading pornography, seeking for the websites which have the movie online for free.

The police came to the government office after a fragment of the movie was screened. Deisadze said that it is not the prerogative of the MIA to criticize movies, especially in a country where dirty archive videos are screened in the streets.

“When the government dares to film your private life for blackmail, when the government tortures people in prison and then releases videos of torture publicly, then it is absurd to launch an investigation for spreading pornography,” Deisadze said. He was detained by police.