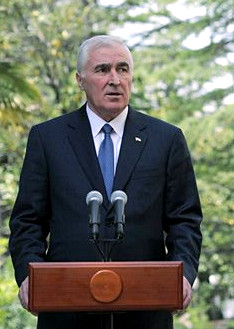 Leonid Tybylty (Tibilov), de facto President of SO, claims that ‘knowing that there would be a full-scale war… almost all of the Georgian population of Tskhinval region left their homes destroyed and burnt their houses down, leaving nothing behind.

Tbilisi, DFWatch – As allegations of ethnic cleansing emerge, Russia and South Ossetia back off from cooperating on August 2008 war crimes investigation by the International Criminal Court.

Emotions in Tbilisi, Tskhinval (Tskhinvali), and Moscow run high as the International Criminal Court (ICC) in The Hague continues its investigation over alleged war crimes committed in the context of the August 2008 war.

After initial warm reception of the ICC’s initiative by all the sides, events took an unexpected turn when Russia refused to cooperate with the Court and South Ossetia began to openly question the its impartiality.

The ICC opened its investigation on 27 January, which marks the first time in the Court’s history that crimes are investigated outside of the African continent. It justified its decision to open the investigation by saying that ‘there [was] a reasonable basis to believe that crimes within the ICC’s jurisdiction have been committed in the situation in Georgia’ and the charges included ‘crimes against humanity, such as murder, forcible transfer of population and persecution, and war crimes, such as attacks against the civilian population, wilful killing’.

All parties to the conflict, i.e. Georgia, Russia, and South Ossetia (a de facto party) initially cooperated with the Court when it requested to be allowed to open a full investigation in October 2015. Tskhinvali authorities initially demonstrated good attitude towards the investigation, while Russia provided the ICC with over thirty volumes of documents.

‘All the documents which confirm the atrocities committed by Georgian military in South Ossetia were collected and sent to the ICC. There is abundance of evidence in the documents. Even if the ICC’s prosecutors are mostly partial, they won’t be able to ignore the undeniable wealth of evidence’, Dmitriy Tasoyty (Tasoyev), Deputy Chairman of the Parliament, said on January 27.

‘South Ossetia has always called for an objective investigation, based on a sound legal basis and international law, into the causes, origins, and the course of the Georgian aggression against South Ossetia, which began in the 1980s and culminated in 2008, leading to numerous causalities and the genocide of Ossetians in the early 1990s’, Murat Jioty (Dzhioyev), president’s representative on post-conflict settlement said on January 28.

A substantial shift in Tskhinval’s rhetoric happened on 8 February, following a suggestion made by prosecutor Fatou Bensouda that there were both Georgian and Russian peacekeepers among war causalities.

‘Crimes against humanity, war crimes and genocide are within our jurisdiction. The office will investigate, for example, the murder of peacekeepers. We have information that there were attacks on peacekeepers both from Russia and Georgia. We are going to obtain further information about this’, Ms Bensouda said on 1 February.

‘It was the Georgian peacekeeping battalion, intended to defend peace and working in a trilateral format, that had left the place of its stationing and went away long before the start of the Georgian operation… organised by the Georgian authorities against our people’, Mr Tybylty said.

South Ossetian authorities suggested that any attempts at proving ethnic cleansing against the Georgian population on the territory of South Ossetia rendered the ICC partial and not objective. The ICC’s prosecutors cited evidence that up to 113 ethnic Georgian civilians were killed and up to 18,500 uprooted from their homes as part of a ‘forcible displacement campaign’ by Russian and South Ossetian forces.

‘I, the president of South Ossetia, declare that there was no ethnic cleansing on the territory of South Ossetia. Almost all of the Georgian population of Tskhinval region was moved to Georgia in advance. Knowing that there would be a full-scale war against South Ossetia, these people left their homes destroyed and burnt their houses down, leaving nothing behind’, Mr Tybylty said.

‘The whole world knows that in August 2008 it was Georgia that attacked South Ossetian peaceful city, which was asleep, its women and children. And today, in Bensouda’s statements, we see clear double standards and [ambiguous] approaches to seemingly obvious things’, Mr Tybylty added.

Already on 2 February, Russia’s Ministry of Justice announced that the country wasn’t able to take part in the investigation, although it had previously provided over thirty volumes of documents to the ICC.

‘As of 1 February 2016, the Russian Federation has not ratified the Rome Statute of the International Criminal Court and the document has not come into power’, the statement reads.

Earlier, Mariya Zakharova, spokesperson for Russia’s Ministry of Foreign Affairs, said Moscow was disappointed with the ICC’s recent activities and would be forced to ‘fundamentally review its attitude towards the ICC’.

‘In fact, prosecutor [Bensouda] is opening an investigation about victims of the attack while being on the side of the aggressor’, Ms Zakharova pointed out. ‘Our country counted on the fact that ICC would become an important factor in securing the rule of law and stability in international relations. In our opinion, unfortunately, this didn’t happen.’

On 12 February, the South Ossetian Prosecutor General’s Office announced that it would resume its own investigation into war crimes committed during the August 2008 war.

Kevin Jon Heller, professor of criminal law at SOAS, University of London, expressed surprise that Russia refused to cooperate with the ICC, given their previous cooperativeness and relative weakness of the ICC’s claim that Russia was in effective control of South Ossetian forces. Such a claim could potentially be incriminating for Russia if proven that South Ossetian forces were guilty of crimes against humanity and war crimes.

‘I simply cannot understand why Russia would announce that it has no intention of cooperating with the ICC’s investigation. If the Request is any indication, Russia has very little to fear. So why not milk a little goodwill by at least pretending to cooperate with the ICC? Russia could use some good press right now, between its cynical intervention in Syria and ongoing eradication of Russian civil society. After all, it’s not like Russia couldn’t stop cooperating with the ICC down the road if the OTP [Office of the Prosecutor] ever did manage to dig up incriminating evidence. At least then Russia’s insistence that the OTP has taken Georgia’s side in the conflict might not seem so absurd. At this point, nothing seems further from the truth’, he wrote.

Tbilisi has so far consistently reaffirmed that Georgia was ready to cooperate with the ICC. Georgian politicians have avoided commenting on the investigation. The handful of comments was very restrained.

‘The decision of the International Criminal Court in The Hague is legally sound and in line with Georgia’s national and state interests’, minister of justice Tea Tsulukiani was quoted saying on 28 January.

Minister of defence Tinatin Khidasheli expressed wonder at Ms Bensouda’s statement that the ICC was going to investigate crimes committed by ‘both sides of the conflict, Georgia and South Ossetia’. Georgian authorities have consistently insisted that Georgia and Russia are the only parties to the conflict.

‘I’m surprised by the statement which was published yesterday, yet I hope that it is based on preliminary results of the investigationand that in course of the investigation the tone, mood, subjects, and parties will be modified and the truth will find its way to The Hague’, Ms Khidasheli said on 28 January.

‘Transparency and the cooperation are our main instruments in this case in order to prove that Georgia faced ethnic cleansing in 2008 and our cultural heritage was destroyed’, Ms Tsulukiani was quoted saying after the meeting.

Georgian media widely reported that Ms Bensouda was currently awaiting response from Moscow regarding a top-level meeting with Russian officials.

‘We asked the Russian delegation for a meeting, but we haven’t received an answer yet. If there is will to do so, we will meet’, Ms Bensouda was quoted saying on 14 February.

The article discusses developments as seen from South Ossetiawhich doesn’t imply a position on South Ossetia’s international legal status andmight not reflect the view of DF Watch. South Ossetianplace-names and personal names are transliterated according to how they would be spelled in the Ossetian language.