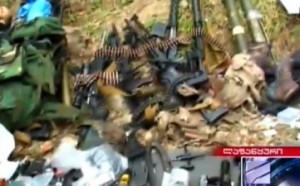 MIA says among armed groups there are persons from North Ossetia, but doesn’t offer any details about the dead boeviks’ identity.

The fighting occur on Wednesday night-early morning in a forest near Lapankuri village in the gorge of small mountainous river Lopota, just 15 km away of Russian-Georgian border after militants from Dagestan crossed border and took five young Georgians as hostages.

According to the MIA special operation is almost finished but the whereabouts of other, presumably 6, militants is still unclear. Health Minister stated on Wednesday evening that condition of five wounded Georgian officers is “stable”.

“Eleven corpses out of twenty-member armed group are already discovered,” said ShotaKhizanishvili, Deputy Interior Minister during a press-conference on Thursday at the local police station.

He said that possibly there are several injured in the forest; operation wasn’t timely finished because of fog, and bodies will be buried according to the dead men’s religious beliefs, not specifying the location.

Georgian president Mikheil Saakashvili responded to recent events saying that there were negotiations with armed group and Georgian law enforcers suggested them to give up, but they refused.

“Shootings followed to the last operation to free hostages, which ended up with liquidation of members of their band.”

“We salute tourists but won’t let raids of armed persons against peaceful population on Georgian territory,” he said adding that disorder will stay beyond the ridge and won’t continue here.

Russian media, relying on anonymous source in the Dagestani police, reported that the armed group had escaped to Georgia from law enforcers of Dagestan, while the Russian Federal Security Service claimed that no armed groups have crossed the Russian-Georgian border’s Dagestani section.