Georgia received complaint from another country about corruption

Georgia received complaint from another country about corruption 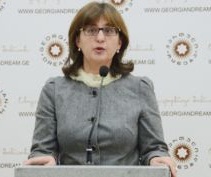 Foreign Affairs Minister Maia Panjikidze confirms in an interview with DF Watch that she has received a two page letter from a foreign country complaining about one of its citizens having been subjected to pressure from the previous Georgian government.

She said a high official in the National Movement government forced a foreign businessman to take part in corruption, demanding that he buy the government expensive cars and in return promising to simplify customs procedures. He was further required to pay monthly payments. Now the case will be investigated.

The letter was first reported by the Chief Prosecutor, but was confirmed by the new Foreign Minister in a tête-à-tête with DF Watch about the government’s plans and priorities in the foreign policy. She says President Mikheil Saakashvili and his party have no reason to say that the government is changing direction in the foreign policy, and the international community knows it.

M.P: No-one will be able to find a statement or phrase either in the election campaign or later, which gives reason to say that Georgia is changing its foreign policy. Many things confirm this and disregarding statements, also the actions of the new government; the Prime Minister’s [first] visit abroad, which took place in Brussels, my visits or other ministers’s visits, indicate that Georgia is moving toward Europe. This is the choice of the Georgian people. Saakashvili didn’t invent this. This is the political strategy of this country, and it has followed this course since the day it gained independence.

DFW: You have mentioned visits. Is there anything which would prove the course of Georgian Dream, or is there any result which can be seen as an achievement of the new government?

M.P: During those two months since we came into government, many things have changed in the country. Our partners abroad do not leave those changes unnoticed. The foreign policy is not separate from the domestic policy, but a continuation of it. Accordingly, our main goal is to inform correctly about what we are doing domestically and confirm this strategy that I mentioned.

When I said that the foreign policy is not independent from the domestic policy, I meant that the requirements for being more integrated in NATO and EU are the same as our domestic goals. Law enforcement bodies, building democratic institutions, development of civil society, defending human rights have a large significance here. If these goals are not achieved, we cannot achieve success in the country or outside it.

DF: If we look at Saakashvili’s statements, there is another perspective: that there was an agreement between the new and old government that the president would be in charge of the foreign policy, and he got furious when the new government interfered in his domain. Did there really exist such an agreement?

M.P: I don’t know anything about such an agreement. Ivanishvili and Saakashvili met only once, and as far as I know there was no discussion about foreign policy in this regard. If the president wants to interfere in the foreign policy, and it is so in every normal country, then he should communicate with the Foreign Affairs Ministry in the spirit of cohabitation. About 300 people work at this body, and about same number of people abroad. This is a huge body, which together with the government defines and implements the foreign affairs course of the country. All who are responsible for the foreign affairs course should coordinate with the foreign ministry. No such thing has happened yet. I have never met with Saakashvili. I twice met with Mr Giga Bokeria, and cooperation on foreign policy issues was not a topic of our conversations. That’s why this is really unexpected for me, and the president won’t be able to chair the foreign policy alone.

DF: The Chief Prosecutor said that Georgia received a note from another country which accuses a Georgian minister of violating the rights of a citizen of their country. Can you confirm that you have received such a note?

M.P: Yes, I can confirm that there was communication between Georgia’s Foreign Affairs Ministry and the ministry of another country, which is not public, so I cannot go into detail. I am confused as to how you know about this. This country didn’t think it necessary to go public with this information and that’s why I cannot say anything. But I can say that not only Georgia is complaining to former governments, but other countries are demanding to restore justice in Georgia because of suppression of their own citizens and probably this will happen from other countries too.

I can only tell you that it is about business and investment and a high official in the former government forcing corruption on business, demanding to buy expensive cars for his own body and in response promising to simplify customs procedures, in addition demanding to bring money monthly.

DF: We know of such cases involving citizens of Israel. Is that country a member of EU? Does the complaint come from a European country?

M.P: It is a NATO member country, but the main thing is that there aren’t only complaints about harassment coming from business circles in Georgia, but also from abroad, and the schemes are even more complicated than we could ever imagine. The other country demands an investigation and we are obliged to answer them. The question is: how to answer them if we do not examine what is written in that two-page note?

DF: There are certain requirements for getting closer to the EU, which should have been fulfilled already. What is the situation now in this regard?

M.P: We work together with parliament and many other bodies are involved. We are carefully listening to the Trade Union and representatives of business inside the country. We also cooperate with partner countries and international organizations, especially with the International Labor Organization (ILO). The labor code should be amended by taking to heart their recommendations.

This is one of the most important goals. In addition, there were cartel agreements in Georgia and there didn’t exist an anti-monopoly service. Cartel agreements should be abolished and anti-monopoly service should be set up. That is what I mean when I say that domestic and foreign policies are tied together. If the legal basis is not in order, if everything isn’t harmonized with those you want to integrate with, it won’t happen, because there will be contradictions, and that’s why it is important to solve domestic issues.

DF: Saying that the Kars-Akhalkalaki railway project may not be economically beneficial for Georgia – can this have a negative influence on Georgia’s relations with Europe?

M.P: Of course this statement focused only on the economic dimension. It said nothing about the existence of the project. Even more, its importance has been underlined several times, and November 12, when the Prime Minister was in Brussels, he spoke about the importance of this project. Later, on November 14, at a meeting with NATO’s Secretary General, he spoke about the issue that the railway which will be built will be the shortest route to return personnel and equipment from Afghanistan, and this route will be most beneficial and short for transit in the other direction. I talk about this at every meeting I have with my European colleagues and especially with representatives of NATO members, as they are interested in the issue of reverse transit.

DF: The main topic of improving relations with Russia is trade. What do you expect to achieve?

M.P: The main goal of our policy is to restore [Georgia’s] territorial integrity, whether it is foreign or domestic policy. Accordingly, Russia is the main player in this regard and a good relation is better than bad relation with this country. We do not reduce the relation to purely economics, but we want to build the relation up from economy to other levels. We start from the economy, because the economic interest is the most common and simple. That’s why we start from what is simple and will be beneficial to the Georgian economy and what is also in Russia’s interest. Trade, economy, culture, humanitarian issues are causes that have practical purposes and we think it is correct to start with them, and let’s see how things proceed. We haven’t said that in couple of years we expect magic. We know that we need some patience.