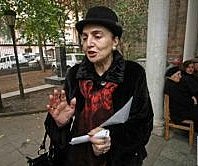 TBILISI, DFWatch — Georgia’s new government will transfer USD 80 000 to the family of Zviad Gamsakhurdia, the country’s first president after independence.

Finance Minister Nodar Khaduri told journalists on Tuesday that this money was debt that Eduard Shevardnadze’s government had to the late president’s family which was never paid back due to a budget crisis at the time.

In 2002, the Georgian parliament adopted a law about socially providing for the family of the first president. The law defined paying the security expenses for Zviad Gamsakhurdia’s family, as well as cover their communal fees and other expenses.

130 000 lari was allocated for this purpose in the 2003 budget, but, Khaduri says, there was a finance crisis in 2003 and the state wasn’t able to fulfill the obligation taken on by the budget bill.

“Manana Archvadze Gamsakhurdia (the first president’s widow) appealed to the finance minister last December and demanded to release this money. We discussed the issue and in accordance with the law, the liability will be covered,” he explained.

Zviad Gamsakhurdia was the first democratically elected president of Georgia, and held office in 1991-1992.