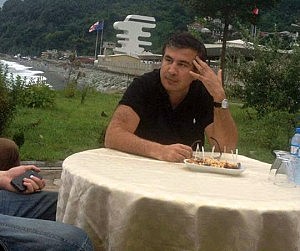 Much of the content in the statement by the Prosecutor General’s Office dealt with the dispersal of an anti-government rally and the storming of a TV studio on November 7, 2007.

“Saakashvili exceeded his official powers by using violence and affronting human dignity of a victim, which caused substantial damage to the rights of individuals and legal entities, legitimate public and state interests,” the statement read.

The offense is punishable by from five to eight years in jail.

Adeishvili is charged with exceeding his powers, an offense under article 333 of the Criminal Code, passage two and three.

The charges against Merabishvili are the same, 333 article, passage two and three, which is punishable with from five to eight years in jail.

The updated charges against Ugulava and Kezerashvili were announced over the last two days.

Ugulava’s lawyer said the Prosecutor General’s Office changed the charges against him on Saturday, in a certain case concerning embezzlement.

Ugulava was charged with violating section 333 of the Criminal Code, passage one, which is exceeding official authority. He is now charged under articles 182 and 194, which are about embezzlement and money laundering.

Kezerashvili was also charged with exceeding his official authority, in the case concerning breaking up the anti-government rally and breaking into Imedi TV on November 7, 2007. He is now charged with money laundering.

Kezarashvili is currently in France, which has refused to extradite him to Georgia.