Georgia may revise taxation on some imported goods

Georgia may revise taxation on some imported goods 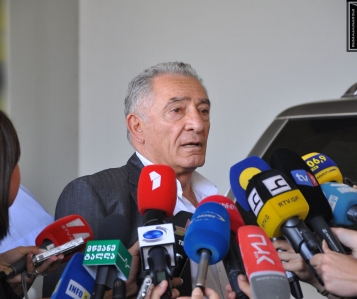 Gogi Topadze, one of the parliamentarians who authored the bill. (Interpressnews.)

TBILISI, DFWatch–Georgia may change the rules for VAT taxation and abolish advantages for importers of certain categories of goods.

Parliament has started reviewing the draft, but the National Movement criticizes it and says they believe members of the ruling coalition are trying to lobby their own business interests and that the new rules will hamper the economic development of the country.

The new bill was drafted by members of parliament who also run a business, the parliamentary faction Georgian Dream Industrialists. Faction leader is Gogi Topadze, who is well-known in Georgia for his brewery business.

Georgian legislation prohibits MPs from being involved in business. Topadze has registered his beer business in a different name than his own. The law says an MP cannot own any business, but there are no mechanisms to control whether an really MPs owns a business or not. Someone involved in business who becomes an MP can formally re-register the business on someone else’s name.

Topadze’s faction wants to remove the regulation from Georgian legislation which defines a special VAT tax on import. It determines advantageous tax terms for certain categories of goods if a person paid more than 200 000 lari in tax during 12 months.

The authors of the draft think this regulation creates a non-competitive environment for persons who cannot reach this amount of turnover during a year. This will typically be small and medium sized businesses.

“There is a non-competitive environment for local producers as well, because importers have better conditions – during import producer can use special taxation regime and in some time they will get so-called ‘free money’, while when buying local produce a person won’t be able to use such a regime,” the MPs explain.

Zurab Japaridze from National Movement says abolishing this rule aims at interrupting the import of goods and their produce will become more beneficial and this will have a bad influence on Georgia’s economic development.

Parliament has not yet made a final decision about the draft.