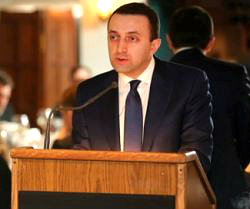 TBILISI, DFWatch–Georgia is starting a pilot project to introduce electronic government, or e-government.

Representatives of the Justice Ministry on Monday presented an action plan for 2014-2018 named ‘digital Georgia’ which has 11 priority areas.

The goal is to improve state services for people and strengthen the local level of government.

The state commission for developing e-government is headed by Prime Minister Irakli Gharibashvili, and aims at coordinating the implementation of e-government through information and communications technology and will make adjustments during the pilot phase.

Presenting the plan on Monday, Gharibashvili emphasized the importance of strengthening local governments and proposed to increase the number of public service centers.

The commission will have to make monthly reports about the progress in implementing ‘digital Georgia.’

Ex-President Mikheil Saakashvili also had an idea to develop ‘digital government’ in 2012.

He suggested making special services to let citizens speak with holographic images of ministers and other government officials in case, but his plan was never implemented.